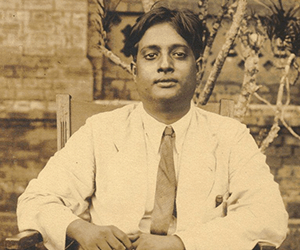 The 20th century started with extraordinary advances inevery field of science. In Physical Sciences, introduction of quantum theory revolutionized our understanding of the world. Satyendranath Bose was of the many brilliant minds who were part of this revolution. Paul Dirac named a class of sub-atomic particles as “bosons” to commemorate this great Indian scientist. Though the coveted Nobel Prize eluded Bose, the path he paved through research on Bose-Einstein statistics and Bose-Einstein condensate, won seven Nobel Prizes for other scientists. However, no award could have done enough justice to the immense impact he left on his field of science and on science education in India.

Bose was born in Calcutta (now Kolkata) on New Year’s Day in 1894 as the eldest child to Surendranath Bose and Amodini Devi. The family’s ancestral home was in Bara Jagulia in Nadia district. Surendranath Bose worked as an engineer in the East Indian Railway Company.

He passed the matriculation examination from Hindu school in 1909, ranking fifth on the merit list. Then he joined the Presidency College for intermediate science course where he was taught by the likes of Jagadish Chandra Bose and Acharya Prafulla Chandra Ray. Bose ranked first and passed the BSc in mixed (applied) mathematics in 1913. He scored a new record of marks in the MSc in 1915. That record is yet to be shattered. Another great scientist, Meghnad Saha was his classmate and ranked second in the exam. The next year he joined the University of Calcutta as a research scholar and started his studies in the theory of relativity. In those early days of quantum theory and relativity, this field had immense potential. Alongside science, Bose also studied many languages including French, German and Sanskrit. He was also deeply interested in literature and could play the esraj as well.

Bose was a lecturer in the physics department of University of Calcutta from 1916 to 1921. He, along with Saha, prepared the first book in English on Einstein’s theory of relativity in 1919. In 1921 he joined the recently founded University of Dhaka and helped immensely in its development by setting up new departments and laboratories with modern equipment. He also taught thermodynamics and electromagnetism.

1918 onwards he presented several papers in pure mathematics and theoretical physics. His 1924 paper deriving Plank’s quantum radiation law without any reference to classical physics, was seminal in creating the very field of quantum statistics. After this paper was rejected initially, Bose sent it directly to Einstein who recognized its importance. Einstein translated the paper in German and submitted for its publication to the Zeitschrift fur Physik with a strong recommendation. This birthed the Bose-Einstein statistics. Extending the idea of Bose to atoms, Einstein soon predicted the existence of Bose-Einstein condensate, a dense gathering of particles with integer spin. The particles were later named ‘bosons’ after Bose. Existence of bosons were proved by experiment in 1995.

In 1924 Bose took a research leave from Dhaka University and worked for two years in European X-ray and crystallography laboratories alongside the likes of Marie Curie, Louis de Broglie and many other remarkable scientists. He met Einstein in October of 1925 in Berlin and they had detailed conversation about their research. Bose also attended a quantum theory course by Born while in Berlin.

He returned to Dhaka in 1926 and was appointed the head of the Department of Physics at Dhaka University following recommendation of Einstein. Bose designed and arranged for many laboratories and equipment that soon made the department a center of research in X-ray spectroscopy, X-ray diffraction, optical spectroscopy, magnetic properties of matter, wireless and unified field theories. He also derived and published an equation of state for real gases with Meghnad Saha.

During the partition of India in 1947, Bose returned to Calcutta University and taught there until 1956. He put special emphasis on using local materials and technicians for equipment and insisted his students to follow that too.

After a brief stint as the Vice-Chancellor of Visva-Bharati University in Shantiniketan, He returned to University of Calcutta and continued research in nuclear physics and organic chemistry. He then worked in some applied research as well, including extraction of helium from hot springs of Bakreshwar.

Apart from physics he made deep studies in geology, chemistry, zoology and other sciences. He also did some research in biotechnology and literature. He strongly advocated for science education in mother tongue and devoted a lot of his time to promote his mother tongue, Bengali as a teaching language.

Satyendra Nath Bose married Ushabati Ghosh, daughter of a prominent physician in Calcutta. Bose was 20 at that time while his wife was 11. The couple had nine children.

This great scientist passed away on 4th February, 1974 in Kolkata. He was 80 years old at the time of his death.