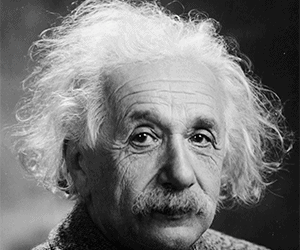 Albert Einstein was a great physicist. The whole world knows him. He made a new introduction to modern physics. He drafted new laws on the effects of illumination on physics and the development of quantum theory. With his invention, he earned the Nobel Prize in Physics. He published four groundbreaking papers during Annas Mirabilis, making him more known to people all over the world.

The famous scientist, Albert Einstein, was born on March 14, 1879 in a noble family in Ulm, Germany. His father's name was Hermann Einstein and his mother's name was Pauline Koch. His father was an engineer and salesman by profession. His mother was a housewife. He had a sister named Maja Einstein. A year after Albert was born, he and his family moved to Munich.

Albert began his primary education at the Catholic Elementary School in Munich. From an early age he was proficient in mathematics and physics. At just twelve years of age, he learned algebra and geometry without anyone's help. At the same time he discovered his own original proof of Pythagorean theory. Once his hometutor allowed him to practice Geometry textbooks. But he was surprised when he found that Einstein had practiced all over the book in a short time. By this the teacher understands that Einstein is a very talented student.

At the age of 16, he appeared for the Swiss Federal Polytechnic Entrance Test. But he failed to pass the rest of the subject except for mathematics and physics. At the behest of the Principal, he attended the Argavian Cantonment School and studied until secondary. Then he passed the Swiss Matura in 1896 and got the highest marks in Physics and Mathematics. Then he did a Teaching Diploma on these two subjects.

On 1896, he got involved with Marie, the daughter of his professor, Jost Winteler. Later, Albert's sister, Maja,  married Paul, the son of Jost Winteler. He was introduced to Mileva Merrick while studying polytechnic. On January 1903, they were married. They had two sons named Hans Albert Einstein and Edward Albert Einstein. In April, 1914, Mileva learned that Albert's first love was Elsa. Then she returned to Zurich with her two sons. In 1919, they were divorced. In the same year, Einstein married Cousin Elsa for the second time. But in December 1936, Elsa died.

After passing college, he published his article 'Folgerungen ausden Capillaritatseracheinungen' in a magazine called 'Annalen der Physik'. Two years later, he began working in the bern under the Federal Office for Intellectual Property. Here he started working as an Assistant Examiner. During this time he formed a group of friends with whom he regularly discussed philosophy and science. This group is named 'Olympia Academy'. On 1903, he became a permanent employee of the Swiss Patent Office. Here he had to answer all the questions about the transmission of electric signals. He also talked about the E = mc2 equation in his month energy paper.

On 1905, he completed his thesis, and received a PhD from Zurich University. While here he studied analytical mechanics and thermodynamics. He also studied quantum mechanics. On 1908, he was known as a lecturer and scientist at the University of Bern. He then started working as a full-time professor at Charles Ferdinand University in Prague.

On 1913, he had left Berlin and moved to stay with his lover Elisa. Just three years later, he was elected president of the German Physical Society. His new theory on General Relativity was published by Aurther Eddington in 1911. On 1922 he was awarded the Nobel Prize for discovering new theories of his theoretical physics and photoelectric. In addition to the Nobel Prize, he received the Copley Medal Award from the Royal Society by 1925. He then went on to lecture at Columbia University and Princeton University. He also lectured at King's College, London. Soon he published an essay he wrote. It was called 'My First Impression of the USA'. From 1922 to the next ten years, he was a member of the Geneva International Committee on Intellectual Corporation.

He returned to the US in 1933 and took up a position at the Advanced Studies Institute. However, he was a student at Oxford from 1931 to 1933. In 1939, a group of Hungarian scientists alerted Washington to the atomic bomb research. But Einstein, along with his co-workers Edward Taylor and Eugenie Winger, warns the Americans that they are soon going to succeed in producing atomic bombs as German scientists are doing research. As a result of World War II in Europe, Szilard and Winger met with Einstein to talk about the possibility of atomic bomb. Then they wrote a letter to President Roosevelt, and in the center of the letter, Einstein established his relationship with the royal family in Belgium.

By 1946 he went to Lincoln University and was honored with an honorary degree. Shortly before his death, Prime Minister David Ben Gurion requested him to become Israel's president, but Einstein refused.

In 1918, he joined the German Democratic Party. He was also inspired by Mahatma Gandhi. He also wrote letters to him.

At the age of 76, he had an abdominal aortic aneurysm, resulting in his internal bleeding. He was then taken to Princeton Hospital on 17th April. But he died on April 18. After his death, his body was autopsied and his brain was removed by operation and kept in a safe place, so that later neuroscientists could test his brain to see what was in his brain that made him so intelligent.