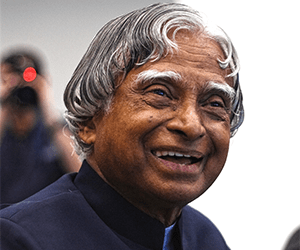 Abul Pakir Zainul Abedin Abdul Kalam (APJ Abdul Kalam) was known as the President of the 20th Century, India’s ‘Missile Man’. He was the son of a very poor family. Not only as a scientist but also his unique role as an ideal man is noticeable. He first realized, ‘The best brains of the nation could be found on the last benches of the classroom’.

Born on 15th October, 1931 in Rameswaram, a poor Muslim family was born in Ramnathaswami district, Abul Pakir Zainul Abedin Abdul Kalam. His father’s name was Zainul Abedin, who was the owner of a boat and his mother’s name was Ashiyamma, who was a housewife. Abdul Kalam was the youngest child of his parents. He has one elder sister and four elder brothers. His father Zainul Abedin used to help the pilgrims cross the boat between Rameshwaram and Dhanushkodi. She has to get to work to provide her family expenses since her childhood. His ancestors were  extremely wealthy and big businessmen, but they lost all their property. Because of this, extreme poverty consumed his family. So forced to sell magazines from a very young age, he had to help the family.

He was a medium, hard-working and intelligent student. After passing from Ramnathapuram Schwartz Matriculation School, he started writing in the newspaper, along with physics subjects at St. Joseph College of Tiruchirapalli. His intense desire for his studies gave him success in his student life. Then he came to Madras in 1955 and received his education from the Madras Institute of Technology on Aviation Technology. For a short time, he wasted the chance of being a warrior pilot. Note that he was the ninth place in the test of being a warrior pilot. The first 8 employees were taken for the post.

After completing the college in 1960, he was appointed as a scientist in Indian Defense Research and Development Organization’s Aeronautical Development Establishment. There he was an employee of the famous scientist Dr. Bikram Sarabhai. In 1965, he worked independently in the Defense Research and Development Organization. In 1969, he received official approval. He also took up the task of testing the Pokhran-2 missile in India in 1998. The united nations has recognized Dr. Kalam’s 79th birthday as World Student’s Day.

He made a plan for all over the country so that the welfare of the country could be achieved. His plan was called Technology Vision 2021. His aim was to improve the country's economic development, increase human health, increase agricultural production and, above all, education through this scheme.

In the mid-1990s, he achieved success by attempting to build the Polar Satellite Launch Vehicle and SLV-III. He was elected the 11th President of India in the support of the Bharatiya Janata Party(BJP) and the National Congress in 2002 and served as the President for five years. He also studied Physics and Aviation Engineering. For the next forty years he joined the Indian Space Research Institute as a scientist. He also played an important role in India's interdisciplinary programs and military missile projects. Due to his famous ballistic missile research, he was called 'Indian Missile Man'. In his hand, ‘Agni’ and ‘Prithvi’ got the shape.

Some of his famous books are-