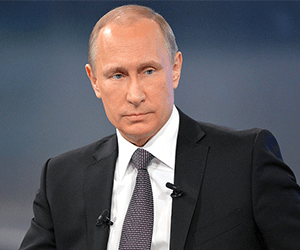 If somewhere we heard anything about Russia , the first and foremost person we can think of is Mr. Vladimir Putin, the renowned and popular president of the Russia Federation. 90s was a rough time for Russia as the USSR dissolved in 1991 and merely a part of it became Russia that we know today . Since the early days of Russian Federation to till date Putin made great efforts towards the well being of Russia , and people elected him as a president thrice .

Vladimir Vladimirovich Putin was born on 7 October 1952 in Leningrad, an eastern city of former Soviet Union (now St. Petersburg, Russia). He was the youngest of three children of Vladimir Spiridonovich Putin (1911–1999) and Maria Ivanovna Putina ( 1911–1998). Putin's mother was a factory worker and his father was in the Soviet Navy serving in the submarine fleet in the early 1930s. His father also participated in World War 2 and his family was severely affected by the war.

In 1960, Putin started at School No. 193 at Baskov Lane, near his home. At age 12, he began to practice sambo and judo. He is a Judo black belt and national master of sports in Sambo. In his childhood he always wanted to be an intelligence officer inspired by soviet mainstream movies. Putin studied German at Saint Petersburg High School and speaks German fluently.

Putin studied Law at the Leningrad State University (now Saint Petersburg State University) in 1970 and graduated in 1975. His thesis was on "The Most Favoured Nation Trading Principle in International Law". While there, he was required to join the Communist Party of the Soviet Union and remained a member until December 1991 till the disintegration of Soviet Union.

From the very beginning Putin and his family was Orthodox Russian Christian.

He married Lyudmila Shkrebneva in 1983 and lived together in East Germany from 1985 to 1990. After that they moved to Russia. They have two daughters, Mariya (born in 1985) and Yekaterina (born in 1986). Unfortunately they mutually divorced in 2013 , in 2014 it was confirmed by Kremlin. Official figures released during his presidential election put his wealth at approximately 4 million Rubles ( $ 150,000).

Putin is frequently seen promoting sports such as skiing, badminton, cycling, fishing across Russia. He also very fond of Ice Hockey and Bandy or Russian hockey. He was well trained in judo(a black belt owner ) and sambo , in which he won many championships. Putin co-authored a book in Russian as judo with Vladimir putin ,and in English under the title Judo: History, Theory,Practice (2004).

The KGB( komitet gosudarstvennoy bezopasnosti) or Committee for State Security in English ,was the main security service agency of Soviet Union from 1954 to 1991.

In 1975, Putin joined the KGB and trained at the KGB school in Okhta, Leningrad. After training, he worked in the Second Chief Directorate (counter-intelligence), before he was transferred to the First Chief Directorate, where he monitored foreigners and consular officials in Leningrad. From 1985 to 1990 he served in Dresden East Germany using a cover identity as a translator.

According to Putin's official biography, during the mass protest and fall of the Berlin Wall that began on 9 November 1989, he burned KGB files to prevent demonstrators from obtaining them. Surprisingly after the collapse of East German government, Putin returned to Leningrad in early 1990, where he worked for about three months with the International Affairs section of Leningrad State University.

In 1999, Putin described communism as "a blind alley, far away from the mainstream of civilization".

After the end of Soviet Regime most of the former assets of KGB were liquidated so there’s dilemma about Putin Career at that time. From 1990 to 1996 he was posted on many high ranking government places. In 1991,he became the head of the Committee for External Relations of the Mayors’ office in Saint Petersburg and later in 1994 he appointed as the First Deputy Chairman of the government of Saint Petersburg.

In march,1997 president Boris Yeltsin appointed him deputy chief of Presidential Staff, which he remained until 1998. On December 31, 1999 Yeltsin resigned and Putin became the acting president of Russian federation.

Within three month the presidential election was held and Putin won the election with 53% of the votes. Later on he re-elected for second time from 2004 to 2008 , Third time for 2012 to 2018 and recently for fourth time in 2018 . In between as Putin was barred from third consecutive term by the Constitution of Russia, he served as a prime minister under the presidency of Dmitry Medvedev from 2008 to 2012.

After the collapse of Soviet Union , Russia faced a major economic setback as the 25% of the former soviet areas formed independent nations. Major industrial areas and areas with strategic importance were outs of hands such as strategically important Ukraine , Oil rich Azerbaijan etc. So Putin faced many challenging tasks ahead of him. The first major challenge to Putin's popularity came in August 2000, when he was criticized for the alleged mishandling of the Kursk submarine disaster the worst disaster in Russian navy in that decade.

Between 2000 and 2004, Putin set about the reconstruction of the impoverished condition of the country, apparently winning a power-struggle with the Russian oligarchs, reaching a 'grand bargain' with them. This bargain allowed the oligarchs to maintain most of their powers, in exchange for their explicit support for—and alignment with—Putin's government.

In 2003, a referendum was held in Chechnya, Islamic majority region, adopting a new constitution which declares that the Republic of Chechnya is a part of Russia; on the other hand, the region did acquire autonomy. Chechnya has been gradually stabilized with the establishment of the Parliamentary elections and a Regional Government.

On his second presidential term he tried to stabilize the country’s economy through many reforms and increased the defence spending. Under the Putin administration from 2001 to 2007, the economy made real gains of an average 7% per year, making it the 7th largest economy in the world in Purchasing power Parity (PPP). In 2007, Russia's GDP exceeded that of Russian SFSR in 1990, having recovered from the 1998 financial crisis and the preceding recession in the 1990s.

In 2014, Russia made several military incursions into Ukrainian territory. After the Euromaidan protests and the fall of Ukrainian president Russian soldiers without insignias took control of strategic positions and infrastructure within the Ukrainian territory of Crimea. Russia then annexed Crimea after a disputed referendum in which Crimeans voted to join the Russian Federation, according to official results.

On 30 September 2015, President Putin authorized Russian military intervention in the Syrian Civil War, following a formal request by the Syrian government for military help against rebel and jihadist groups. This led to many clashes between the US led force and pro Russians separatists. Later on Putin ordered many air stricks on Syria and he got criticised from western media.

During his tenure he made good relationship with China and Iran as well as with other nations those formally opposed the US and its allies. Russian became one of the strongest members of BRICS( Brazil, Russia, India, China, South Africa) , one of the important world organisations.

According to a June 2007 public opinion survey, Putin's approval rating was 81%, the second highest of any leader in the world that year. So it is clear that there’s great influence of him exists among the Russians . Despite the fact that he made tremendous efforts to overcome the difficulties faced by Russian federation, still there are many things left to do. The cold war era was long gone when Russia used to have the 2nd biggest military as well as the 2nd biggest economy, now merely a part of it left. As a world renowned leader Its Putin’s utmost duty to brought the former glory of Russia again.