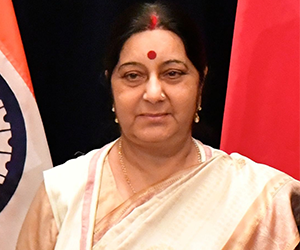 Sushma Swaraj was a Supreme Court lawyer and a veteran in Indian politics and one of the most loved politician across all parties and factions. As a member and leader of the right-wing Bharatiya Janata Party (BJP) she had served as a minister in many state and central governments, notably as the youngest cabinet minister of Haryana, and as the minister of external affairs in the first Narendra Modi government.

Sushma Swaraj was born as Sushma Sharma on 14th February, 1952 at Ambala Cantonment in Haryana to Shrimati Laxmi Devi and Hardev Sharma. Originally, the family hailed from Dharampua of Lahore, Pakistan. Her introduction to politics can be traced to her father, who was a notable member of Rashtriya Swayamsevak Sangh, the RSS. Sushma had one elder brother and one elder sister.

Sushma received education at Sanatan Dharma College in Ambala Cantonment and earned a bachelor’s degree with major in Sanskrit and Political Science. After that, she studied law at Panjab University, Chandigarh. She won a state-level competition for the best Hindi speaker, organized by the Language Department of Haryana, for three consecutive years.

Sushma Swaraj started her career as an advocate in 1973 in the Supreme Court of India. In 1975, she became a part of socialist leader George Fernandes’s legal defense team. Close association of her husband, Swaraj Kaushal, with Fernandes may have catalyzed that.

She was a member of Bharatiya Janata Party’s student wing, the Akhil Bharatiya Vidyarthi Parishad in the 1970s. She actively participated in Jayaprakash Narayan’s Total Revolution Movement. After the national emergency period, she joined the Bharatiya Janata Party and with time, climbed the hierarchy to become a national leader for her party.

Swaraj won the election from Ambala Cantonment assembly to become a member of the Haryana Legislative Assembly from 1977 to 1982, at an early age of 25. She also held the post of a cabinet minister in this period under Chief Minister Devi Lal. In 1979, at the age of 27, she became the State President of the Janata Party. She again won from the Ambala seat in 1987 and went on to become the Education Minister of Haryana state in the Bharatiya Janata Party- Lok Dal coalition government till 1990.

From 1990 to 1996, she served as an elected member of the Rajya Sabha. Swaraj then became the Minister for Information and Broadcasting in the extremely short-lived Vajpayee government in 1996. Even within this short time, she started live streaming of parliamentary debates on TV. In 1998, she regained this ministry again in 1998. Later that year she resigned from the central government to become the first female chief minister of Delhi; a post she held only for two months. Next, in 1999, she contested and lost against Sonia Gandhi of Congress in the Lok Sabha election.

Swaraj returned to Rajya Sabha in April, 2000. Soon, she was inducted into the ministry as Minister for Information and Broadcasting where she served till 2003. Over the next year, she served as the Minister of Health, Family Welfare and Parliamentary Affairs. During this tenure, she green flagged six All India Institutes of Medical Sciences. She served at the Deputy leader of Opposition during her third term in Rajya Sabha, from 2006 to 2009.

Swaraj won the 2009 Lok Sabha election from Vidisha, Madhya Pradesh and became the leader of the opposition, the first female to do so, in the 15th Lok Sabha until 2014 when her party won the elections to form the government again. She was appointed the Minister of External Affairs under Prime Minister Narendra Modi in 2014. A historic feat as she became only the second woman after Indira Gandhi to hold this position.

Swaraj carried out her duties with distinction in this period that saw her popularity increase both inside and outside of India. She was instrumental in help and homecoming of various Indian citizens who had found themselves in trouble abroad. The list includes homecoming of the then 23-year-old hearing and speech-impaired girl Gita, after being stranded in Pakistan for 15 years.

Controversies, however, were present too. Her no-objection to Lalit Modi’s travel to Portugal from England drew heavy criticism as Modi was the main fugitive in the IPL scandal. An adjournment moment demanding her resignation over this issue was raised in the parliament and was subsequently rejected by voice vote. In 2014, she found herself amid another controversy when she urged the Prime Minister to declare the Bhagvad Gita as the national book of India.

After completion of her term in 2019, she refrained for participating in elections citing health issues.

Sushma married Swaraj Kaushal, a fellow advocate at the Supreme Court of India on 13 July 1975, during the emergency period. Swaraj Kaushal has served as Governor of Mizoram from 1990 to 1993 and was a member of parliament from 1998 to 2004. They couple have a daughter named Bansuri who is a Barrister at Law from Inner Temple in the United Kingdom.

Sushma Swaraj reportedly suffered from a heart attack on 6th August, 2019. She was rushed to AIIMS New Delhi but could not be saved. “Cardiac Arrest” was declared as the cause of death. The next day, her cremation took place with full state honors at the Lodhi crematorium in Delhi.