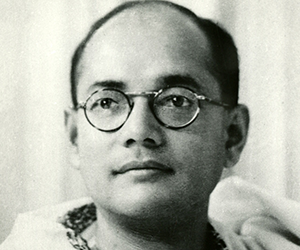 Netaji's name has become immortal in the history of India's independence struggle. His sacrifice for the country is always remembered. He was a real freedom fighter and also the founder and leader of the famous INA (Indian National Army). He was also the president of the Indian National Congress.

Netaji Subhash Chandra Bose was born on January 23, 1897 in the famous Basu family in Cuttack, Orissa. His father's name was Janakinath Bose who was a lawyer by profession. Mother's name was Prabhabati Devi and she was a housewife. Netaji has 14th siblings and Netaji was the ninth child of his parents.

From an early age he was a very talented student. He was the favorite vessel of his teachers because of his extraordinary talent and intelligence. He initially studied at an English medium school in Cuttack called Stewart School. Here he studied till the sixth grade. Then in 1911 he joined the Rance Vance Collegiate School. From this school he passed secondary. In this examination he took first place from Kolkata. In 1918 he passed his BA from Scottish Church College. His subject was philosophy.

His father wanted Subhas to take part in the ICS exam, so he admitted him to Cambridge University for higher education. He then appeared in the Indian Civil Service Examination and finished fourth. But he quit this lucrative job and joined the freedom struggle.

In 1934 he was introduced to Emily Sanchal. The love of this talk and their love after him is concluded through marriage. They were married in 1937 in Bad Gastin. They have a daughter.

Upon returning home after studying from foreign, Subhas went to meet the then Indian political leader Mahatma Gandhi. After meeting with him, he realized that he was not a Gandhi. Gandhiji advised him then and went to Bengal to meet Deshbandhu Chitta Ranjan Das.

Subhas then returned to Calcutta and met with the patriarch Chitta Ranjan Das. Speaking to Subhas, Deshbandhu came to know about his strong mind and on the other hand, Subhas came close to Deshbandhu and Deshbandhu was a mentor of Subhas. The patriot told him, "I was looking for a commander like you to fight for independence". Then the heartbreak of the two grew so much that their names spread across people's faces. Then both were arrested by the English government.

Subhash Chandra took charge of the Swarajya Party in 1925 when Deshbandhu Chitra Ranjan died. At the same time, he also served the service committee of South Kolkata and the Young Bengal Party. He started publishing ideas in Bangla language through 'Banglar Kotha' and 'Forward'. His doctrine stirred enormous inspiration in the minds of the whole country.

The British government was horrified by the imprisonment, observing the extraordinary organization's strength. Then he was sent to a jail called Mandalay deemed dangerous to keep him in Bangladesh. Where Subhash became seriously ill after staying for some time, the British government was forced to release him from prison. Then he concentrated on his work again, as a result he was arrested again and became ill again. His treatment was started in Vienna because of his ban in Germany and England.

In 1938, he was elected president of the Indian Congress in opposition to Gandhi. But Gandhiji, who joined his presidency, could not accept it. In this regard, he remarked, 'Pattabhi's loss is my loss'. As a result, Gandhiji's followers continued to interrupt Subhas's work in various ways, so Subhas could not do his job properly. For this reason he resigned his position. He then formed a team of his own all over India and named it 'Forward Block'.

Subhas then came up with a new plan. Traveling around the country, he began to talk about sedition. As a result, he was again captured in 1940. Started in jail while starving. He was forced to guard at his Elgin Road home. Just a year later, in January 1941, he fled in disguise by motor vehicle. The driver of the motor vehicle was his nephew.

The next day, he arrived in Berlin with the help of a radical. There, after negotiations with Hitler, he began a revolutionary activity. He then went to Germany in April and established a Free India Center in Berlin with the help of a German fund. From this radio station he gave regular speeches so that indigenous peoples would have the courage to stand up against the English. After a while he realizes that operating from Germany to South East Asia will be easier.

But by the end of April 1945, the Germans left Rangoon, and they ordered Azad Hind Fauj to leave Rangoon, but they remained in Rangoon until Subhash gave no reply. After some time they have to leave Rangoon due to adverse conditions.

The army was formed by Rasbihari Bose, the nationalist leader of India. In 1943, he gave the responsibility of the army to Subhas Chandra. The women army was associated with this army separately. In all, there were a total of 85,000 troops. The authority of this army was in the hands of the provincial government. The name of this provincial government was 'Provincial Government of Free India'. It also had its own court, law and currency. A total of 5 countries recognized this government. The main motto of this group was, 'You give me blood, I will give you freedom'.

At that time, World War II was going on. Subhash formed an army of Indian soldiers who were fighting on behalf of the English. All of these troops were specifically provided military education with the help of the German generals. It was during this time that the expatriate Indians declared Subhas Chandra the title of 'Netaji'.

In 18th august 1945, After leaving Rangoon, he became senseless. Japan Radio, meanwhile, announced that Netaji had died in a plane crash while on his way to Tokyo. But after a few days it was revealed that he was alive, but no one knew where he was. The cause of his death remains an unresolved issue throughout the world today.