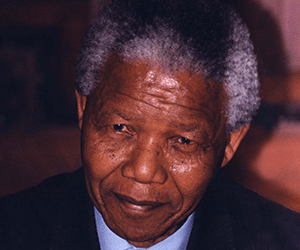 The South African former president and national activist Nelson Mandela (1918-2013) fought for the betterment of the society and unequal human rights associated with social divisions.

As one of the esteemed people of the African National Congress party during the early 1940s, he was a director of both peaceful rallies and armed opposition against the white minority's autocratic administration in a racially segregated nation South Africa. He was a frequent prisoner for almost three decades because of his protest and movements.

Subsequently, he grew to the face of the antiapartheid movement within his country and internationally as well. After his release from the prison in the year 1990, he participated in the annihilation of apartheid.

Later, in the year of 1994, he was the first black leader, who became the president of South Africa. This process initiated the establishment of a multiethnic administration to supervise the country's development. He retired from his work in the year of 1999.

Though he continued to spread his word for harmony and social justice in his country and all around the world, he died at the age of 95 in the year 2013.

1918-1934: On the year of 1918, 18 July Mandela was born in the village of Mvezo in Umtata, South Africa Cape Province. His great-grandfather was chief of the Thembu people ruling in the Transkeian Territories of Eastern Cape Province. Mandela was one of his sons, who was also the grandfather of Nelson.

He lived and grew up with his mother and two sisters, where he roamed around with villagers as a cattle-boy. Though Nelson's parents were illiterate, at the age of seven, he was sent to a local Methodist school by his mother. During his school time, his teacher assigned English name Nelson to him. At the age of nine, his father joined him, his mother and his sisters. Unfortunately, he died of an undiagnosed disease which later was believed to be as lung disease.

1934-1940: During his secondary education at Clarkebury Methodist High School located in Engcobo, Nelson started to socialize with other classmates on an equal basis. His so-called "stuck up" attitude was no more. He also befriended a girl and became close to her for the first time in his life. Sporting activities started dissolving in his plant of everyday life and not to forget; he began developing a love for gardening.

After accomplishing his junior certificate in the next two years, Mandela moved to HealdTown. There, the headmaster was emphasizing on the superiority of English culture and government. But the interest of Mandela lied in native African culture. Mandela consumed much of his spare time at HealdTown as a long-distance athlete and boxer, and in his second year, he was promoted to a prefect.

Some of his friends from the African National Congress wanted South Africa as an independent nation from the British Empire. Yet Mandela sidestepped any association with such movements and shifted to vocal advocate of the British war effort during World War 2.

Along with a first-year community, Mandela questioned the dominance of the second-years and was involved in a Students' Representative Council (SRC) to take actions against the quality of food. For raising the questions, he was also suspended from the university and so ended up there without a degree.

1941-1943: Earning a low wage, Mandela rented a place in the house in the Alexandra Township; despite being reserved in poverty, corruption and pollution, Alexandra consistently remained a unique place for him. Although disturbed by his poverty, he dated a Swazi lady before unsuccessfully attending his landlord's daughter.

To gather money and be near to downtown Johannesburg, Mandela shifted to the union of the Witwatersrand Native Labour Association, residing among workers of numerous tribes. As different chiefs toured the compound, he once attended the Queen Regent of Basutoland.

Defiance Campaign 1950–1954: In March 1950, the Defend Free Speech Convention event took place in Johannesburg in the union for all the African, Indian, and communists to call a May Day general strike which was for the protest towards apartheid and white minority rule. Mandela defied the strike because according to him, the strike was multi-racial and not ANC-led. Majority of black workers were still a part which increased police involvement and repression along with the initiation of the Suppression of Communism Act, 1950, that affected the actions of all protest groups.

Treason Trial 1955–1961: After leading the unsuccessful protest to stop the forced relocation of all black people from the Sophiatown suburb in February 1955, Mandela reasoned that forceful action would prove unavoidable to stop apartheid and all of the white minority rule. On his advice, Sisulu requested weaponry from China, which ended up in rejection.

Mandela started working in newly purchased ANC headquarters at Shell House, Johannesburg and used to reside in Winnie's large Soweto home. Their marriage was turning rough, but he backed her when she was held for kidnapping and assault. He raised funding for her defence prosecutor from the International Defence and Aid Fund for Southern Africa and also from the Libyan leader Muammar Gaddafi. Although putting all his efforts went in vain as she was found guilty and sentenced to six years in prison, reduced to two on appeal.

A televised debate between two of the famous leaders de Klerk and Mandela happened where De Klerk was considered as a more qualified speaker at the event. It all started with some violence. ANC won the elections taking about 63% of the total votes which was slightly less than two-thirds of the overall majority. They won in seven other provinces as well. Finally, after the victory of ANC, Mandela became the president of South Africa.