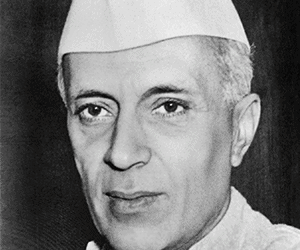 Jawaharlal Nehru is widely admired for his ideology and statesmanship. He is one of the paramount leaders of the Indian independence movement. Undoubtedly, he was the central figure of 20th-century Indian politics and he contributed much for the nation after and before Independence. Alongside with Gandhiji, Nehru became one of the important leaders of the Indian National Congress. He was the first one who calls for complete independence from the British. He shaped the political structure of modern India.

He was born on 14th November 1889 and his father was Motilal Nehru and his mother was Swarup Rani. His father was a barrister and he was strongly involved in the Indian independence movement.

Nehru received most of his primary education at the Harrow school in England and after that, he got admission to the trinity college, Cambridge. After completing his graduate degree he relocated to London in 1910 and enrolled himself at the Inns of court school of law and then he returned to his homeland in 1992. Then he started practicing law as a barrister at the Allahabad high court and from there gradually he involved himself in national politics.

Nehru married Kamala Kaul in 1916 and they had the only daughter namely Indira Priyadarshini Nehru and later she became the first woman prime minister of India.

Nehru was not totally convinced with the functioning of the Indian National Congress but he participated in the civil rights campaign which was initiated by Gandhi. Because of his radical political views, he condemned the Indian civil service for its support of British policies. He contributed both for Besant and Tilak league and his contribution was greater for the former.

In the year 1916, he first met Gandhi and their relationship turned to be a lifetime relationship. With Gandhi as his mentor, he able to rise to prominence in the National congress so much so that he was elected to the post of the general secretary of the congress. He contributed greatly to the national movement of India and along with this, he gave his full support to the freedom struggle an international outlook in the year 1927 and that time, he attended the congress of oppressed nationalities in Brussels in Belgium. He appealed for complete national independence which was primarily objected by Gandhi who proposed a dominion status for India in a time frame of two years. In the Lahore session of congress in 1982, Nehru demanded complete Independence. This resolution made him one of the most significant leaders of the Indian Independence movement.

Nehru realized that the potential of salt satyagraha and jumped on to support Gandhi and was imprisoned along with a large number of nationalists. During the time of World War II, he demanded the assurance of full independence for India after the war but the British did not oblige. After that, in 1947 as India rejoice the withdrawal of British from the Indian oil and the British decided partition among the two countries India and Pakistan.

After that, Nehru was appointed as the head of the interim government. Pakistan was formed on August 14, 1947, and then, Nehru became the first prime minister of Independent India. Nehru tried to change the technological advancements and he tried to propel India towards the modern age. He gave his support towards democratic value and equality for all, irrespective of caste, color or creed. During the time of his prime minister, he brought the changes in domestic, international, economic and agricultural policies.

He believed that educating the young people of India can change the future growth of the country. This is why he established numerous institutions of higher learning. Apart from this, he also included free and compulsory primary education for the children. He was always a follower of peace and non-violence but he realized the importance of defense and tried to prepare the country with the best modern equipment and defense methods. He also initiated the non-aligned movement professing neutrality. The target of this movement is being neutral and not joining any of the two power blocks.

He strongly gives his support in the inclusion of the People ’s Republic of China in the united nations of establishing warm and friendly relations with the neighboring country. His pacifist policies towards china paid no result because the border disputes led to the Sino-Indian war in the year 1962 and the war ended when China declared a ceasefire on November 20, 1962. Along with this, it announced its withdrawal from the disputed area in the Himalayas.

During the time of Nehru’s reign, Kashmir remained a subject of contention because India and Pakistan both wanted to include the state to their country. In the year 1948, Pakistan made an attempt at seizing Kashmir by force but they failed in their attempt.

Nehru’s health was deteriorating in the early year 1960. He died on 27th May 1964 and his body was cremated as per Hindu rites at shantivan, on the banks of the Yamuna River. He served as prime minister of India from August 15, 1947, to May 27, 1964. He wrote many books including ‘the discovery of India’, ‘glimpses of world history’ and his autobiography ‘toward freedom’.

For his enormous contribution towards the betterment of the children, his birthday is celebrated throughout the country as children’s day. Along with this, in India, several institutions and memorials have been named to show their respect towards him. The government of India initiated the Jawaharlal Nehru Award for international understanding that means one can get this award for the promotion of international understanding, goodwill, and friendship among people. His contribution towards the change of the country’s advancement and growth is recommendable.