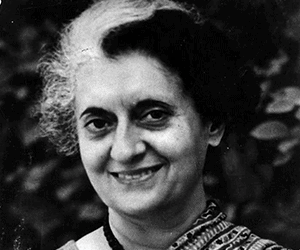 Indra Gandhi was the first and the only lady prime minister in the history of Indian politics. She was also the second-longest duration prime minister after her father Jawahar Lal Nehru and served the country for 11 years from the year 1966 to the year 1977. She was elected to be the president of Indian National Congress on the year 1959. After the death of her father in the year 1964 She was later elected as a member of Rajya Sabha. In the congress party's parliamentary election for choosing the leaders, she fought and won against her rival Moraji Desai to take over the post of Prime Minister of India. In the year 1981, Indra Gandhi was entitled woman of Millennium in an online poll conducted by BBC. Due to her operation of Blue Star in Punjab, she was assassinated by her bodyguards.

Born in a Kashmiri Pandit house, Indira Gandhi spent her early childhood in Payagraj, which is currently known as Allahabad. Her father, Jawaharlal Nehru, who was one of the emerging personalities during the time of independence, came up as the first Prime Minister of India. After the death of her brother at a very young age, she was the only child. She grew up under the direction of her mother, Kamala Nehru, at the Anand Bhavan, which was a large family estate in Allahabad. Most of her childhood was lonely and in grief, as her father was often away, trapped within the political activities. Whereas her mother was mostly ill and couldn't focus on guiding and mentoring Indira. She later died from tuberculosis. She used to converse with her father, mainly through letters.

Most of the time, Indira used to be taught and mentored with the tutors. She took her classes in several different schools. These include Modern School Delhi, St Cecilia's and St Mary's Christian convent schools in Allahabad. She, along with her mother Kamala Nehru, went to Belur Math headquarters of Ramakrishna Mission. Here, she met Swami Ranganathananda, who served as her primary guardian. After that, she also studied at the Vishwa Bharati in Santiniketan, which was later known to be as Visva-Bharati University in the year 1951. During her interview in the college, Rabindranath Tagore named her Priyadarshini, which is a Sanskrit word meaning "looking at everything with kindness". Later she was known as Indira Priyadarshini Nehru. Due to extreme health issues of her mother, she had to leave her university to go and check her ill mother in Europe. During her time in Europe, it was finalized that she would continue the rest of her education from the University of Oxford. After the death of her mother, Kamla Nehru, she temporarily used to go to the Badminton School when she enrolled at Somerville College in 1937 to pursue studying history. Due to her poor performance in Latin at the first attempt, Indira appeared in the entrance examination twice. During her years in Oxford, she was decent in History, Economics and Political Science, but she always used to struggle with Latin.

Due to the health issues in Europe, Indira had to keep oscillating among Switzerland and London for her checkups. This, in turn, affected her overall studies and academic life. An extra flavour of struggle seemed to mix up in her academics. She used to have constant meetings and appointments with doctors and mostly under high medications. During the time of second world war, when german armies conquered Europe, she was treated in Switzerland.

Consequently, all her attempts to return England went empty since many regions were declared under the war zone. She tried to go back via Portugal but was left waiting for two months. Finally, she somehow managed to return in 1941. She then headed back to India, without completing her studies at Oxford. Her husband Feroz Gandhi, who was a was a student at the London School of Economics and native of Allahabad used to meet her in London as well. Both of them married in Allahabad, after which they had two children: Sanjay Gandhi and Rajeev Gandhi.

In the 1977 elections, Akali Dal which was a community, led by the Sikh-majority, established their power in the north Indian state of Punjab. To gain the active support of the Sikh Community and split up the Akali Dal, Indira Gandhi's Congress assisted in bringing the orthodox religious leader Jarnail Singh Bhindranwale to come up in the Punjab Politics. Later, his organization was involved in violence with another religious sect called the Sant Nirankari Mission, and he was suspected of promoting the murder of the owner of Punjab Kesari newspaper. His arrest led to the disposal of his relationships with Congress and grouping with Akali Dal. In the year 1982, he campaigned which asked for greater autonomy for the Sikh-majority state. Some Sikhs also tried to be the part of militancy after getting targeted by government officials and police while supporting their Resolution.

By 1983, the event started taking some violent turns. On April 1983, the Punjab Police Deputy Inspector General was shot dead when he was near the Temple compound. The following day, Akali dal members confirmed the involvement of Bhindranwale in the murder.

After many negotiations, Indira Gandhi ordered the army to clear off the area of the golden temple, which led to massive destruction of human life and property. This movement caught attention everywhere in the nation, and she was being criticized universally from various communities in India.

There was intense criticism of the action by Sikhs in India and abroad. There were also conflicts of resistance by Sikh soldiers in the aftermath of the attack.

Death of Indira Gandhi by Assassination:

In the year 1984, October Indira gave her final speech, where she emphasized her dedication and commitment towards her nation. She added in her speech: "Even if I died in the service of the nation, I would be proud of it. Every drop of my blood will contribute to the growth of this nation and make it strong and dynamic."

Right after her return, two of her bodyguards, Satwant Singh and Beant Singh, shot her dead in the garden. She was shot thrice by Beant Singh, and Satwant Singh fired 30 rounds. After the murder, both of them dropped their weapons and surrendered. Both of them were taken into a dark room where Beant Singh was shot dead. Kehar Singh who also was one of the members in this conspiracy attack was arrested later. Both the assassin and the planner Satwant and Kehar were sentenced to death followed by their hanging in Tihar Jail.