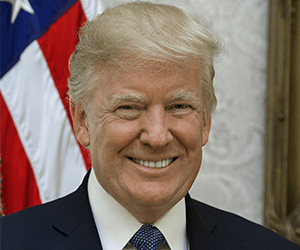 If you have to write the list of most influential persons of 21st century , you will have to write the name of Donald Trump. And why not, because he is currently the president of United States of America otherwise known as the superpower of the world.

In the end of World War 2 when America Is still fighting with bad economic conditions , Donald Trump was born in the year of 1946 on 14th June in the suburbs of New York. His Father’s Name is Fred Trump and his mother is Mary Anne Macleod.

From the very beginning his family was very rich and well educated. His father was a Real Estate Developer. Earlier he attended the Kew Forest school and after seventh grade he moved to New York Military Academy and then in 1968 he completed his graduation in B.S in economics from University of Pennsylvania. In early life his favorite sports used to be the golf and soccer.

Trump’s ancestors were mostly germen origin and his mother’s ancestors were from Scotland. In his life till now Trump married thrice, although there were rumors about his affairs. In 1977 he married Ivana Zelnickova , they had three children named Donald junior ( born in 1977 ), Ivanka ( born in 1981) and Eric (born in 1984). He And Ivana divorced in 1992 and the next year he again married an actress named Marla Maples and they had one daughter. Unfortunately both divorced in 1999.

And finally he married his current wife Melania in 2005 and they had a son in 2006 named Barron . Since his presidential campaigns in 2016 this couple was seen many times publically and gone through many controversies also.

Personal Life and His Achievements :

Today the world know him as the president of united states of America since 2017 , but earlier in his life he was also a very successful entrepreneur and business man . His main business was real estate developer. According to some estimate his net worth is 3.1 billion us dollar in 2019. So theoretically he is a billionaire.

Trump began his business career in 1968 at his father’s real estate company and soon emerged as one of the most successful businessman in New York . He owned many middle class rental housing complex in the outskirts of New York and Manhattan. Later he acquired many hotels and villas such as Plaza Hotel in Manhattan and the famous Palm Beach Estate in Florida. His business ventures were increased to such extent that he owned a whopping 50% share of the Empire State Building from 1994 to 2002.But before his presidential campaigns begin in 2016 his most of the business were either bankrupt or he distribute them among his family members.

Trump as a President :

Trump sworn as the 45th president of USA on 20th January ,2017. He defeated his Democratic opponent Hillary Clinton and was preceded by Barak Obama. There was a controversy in the election process of trump about the involvement of Russian government , but the us government denied it anyway.

Trump delegated the management of his real estate business to his sons Eric and Donald Junior. His daughter Ivanka serves as an assistant to the president and her husband is an advisor in the white house. After sworn as a president Trump amended many bills and signed many economic, law and defense related doctrines.

In December ,2017 Trump signed the Tax cuts and jobs act of 2017, which cut the corporate tax rate to 21 percent, lower personal tax brackets and increased child tax credit. He often criticize some former president’s domestic policies like the NAFTA. He withdrew USA from Trans Pacific Partnership(TPP) agreement. The world saw a major economic disturbance between the two strongest economies USA  China when Trump imposed tariffs on steel and aluminum imports , and eventually starts a trade war with China by sharply increasing the import duties on many Chinese products. These so called economic sanctions impacted heavily on many emerging economies like Brazil , India as well as European Union also.

Since the beginning of his presidential terms Trump made huge budget cuts to many climate change  environment protection related schemes. Mostly he discontinued many Obama era policies like Obama Care intended for health insurance of common citizens.

During his presidential campaigns ,he made promises to make immigration policies much intense. In 2017 he promised to make a more complex and sustainable wall on US-Mexico border to prevent illegal immigrants coming from south. He faced stiff criticism on the issue and opponents often targeting him by saying that’s its unnecessary to spend such huge amount of tax payers’ money on the wall. He massively deported many immigrants residing in United States.

During the 2nd year of his presidency, the federal government was shut down for several days over the issue of funding the Us-Mexico border wall. Trump administration asked a whopping $5.6 billion from federal funds and the shutdown was caused by insufficient funding.

In 2018 he made a zero tolerance policy on immigrants that separate the adult immigrants from their child and held them in US custodies , but facing hard criticism he ordered to end that policy on mid 2018.

Trump shocked the world when he withdrew USA from the Paris Climate Agreement , 2015 and become the only country in the world not to ratify it. Later on he attended G7 summit twice in 2018 2019 but never participated on any climate change related discussions. Once he coined himself as an environmentalist and said “ I think I know more about the environment than most people”.

The most famous slogan of his Trump’s foreign policy was ‘America First ‘ , means his first priority is the USA only . He supports the US military spending in various domestic sectors but relatively oppose US involvements in NATO and Pacific regions. Many people concluded that Trumps is in favor of more authoritarian regime and he is in favor of the white supremacy.

As we know the rivalry between the USA and North Korea is severe, in fact Trump even made threat to entirely annihilate that country over the issue of ICBM missile tests . Though on 18TH june, 2018 Trump North Korea’s president Kim held their first summit in Singapore, so there emerge a hope in complete denuclearization in North Korea.

During his presidency Trump repeatedly accused china of taking advantage of US , thus he started the so called Trade War over Chinese imports. Moreover the Chinese military involvement in Pacific region worries the US military as they have a big operational military base in Japan . According to Stockholm International Peace Research Institute Chinese Military spending is increasing day by day and nowday its became the 2nd largest militaries in the world following USA.

Trump has described Iran as "the rogue regime". He has repeatedly criticised the "Iran nuclear deal “that was negotiated with the United States, Iran, and five other world powers in 2015, calling it "terrible" and saying it’s as a result of negligence of Obama administration . Following Iran's ballistic missile tests on January , 2017, the Trump administration imposed sanctions on 25 Iranian individuals and entities in February 2017.

During Trump’s tenure he made several agreements with US allies like Israel, Saudi Arabia, and supported the American involvement in the Syrian war as well as the war against ISIS. Although later he repeatedly withdraw major US forces from those region and criticised the previous policy makers.

The US-Russian relations which were already at the lowest level since the end of the cold war during the 1990s, have further deteriorated since Trump took office in January 2017. Trump also made some comments on Syria and Ukraine against the Russia.

As the Latin American country Venezuela have been going through its worst economic crisis in 2018-19 , the stability of the government in Venezuela was on the corner. So Trump repeatedly talked about a military invasion on Venezuelan soil but due to the fact that it’s might become much complex political scenario and the involvement of Russia made it impossible to do so.

In fact someone might seem Trump as a business person rather than a president due to fact that he always made decisions regarding only the favour of country’s interest and he seems to saw the world organisations involved in climate change related issues in a different way.

Moreover we can say that Donald Trump is one of the most prominent and efficient US presidents of all time despite the fact that he was severely affected the world politics in many ways.