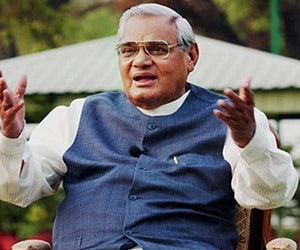 During the time of Atal Bihari Vajpayee in India, there were several schemes which ran parallelly for the growth, development and betterment of the country. These schemes were namely: Nuclear tests, Lahore Scheme, and AIADMK's withdrawal from the coalition.

Atal Bihari Vajpayee was born in a Brahmin family on 25 December 1924 in the city of Gwalior, Madhya Pradesh. His parents were Krishna Devi and Krishna Bihari Vajpayee. His grandfather, Pandit Shyam Lal Vajpayee, had moved to Morena, Gwalior from his original ancestral village which was in the city of Bateshwar, Uttar Pradesh. Krishna Bihari Vajpayee, his father, was a school teacher in his own hometown. Vajpayee completed his high-school studies at the Saraswati Shishu Mandir School in the city of Gwalior. In the year 1934, Atal Bihari was sent to AVM School Barnagar, in the district of Ujjain after his father joined there as a headmaster.

According to Atal Bihari Vajpayee, he defined this moment as his lifechanging moment. He described this moment in a public rally that took place in the year of 1996 during the Lok Sabha election trail. He said that he learned a lesson there, which totally changed his life. And later that day he took a pledge that he'd never memorize a speech. He gave his first speech at Anglo Vernacular Middle School, which was more popular by the abbreviation of AVM School. Later he attended Gwalior's Victoria College which now is also known as Maharani Laxmi Bai Govt. College of Excellence. Atal Bihari Vajpayee attended to study for BA in the subjects Hindi, English and Sanskrit. He also completed his post-graduation degree in the subject Political Science, in which he did an MA from DAV College, Kanpur.

Later his activism started with the youth wing of the Arya Samaj, Arya Kumar Sabha of Gwalior, of which he became the general secretary in the year 1944. He also became a part of the Rashtriya Swayamsevak Sangh (RSS) as a swayamsevak, which in English refers to volunteer, in the year 1939. Directed by Babasaheb Apte, he served the Officers Training Camp of the RSS during the time of 1940–44 and became a pracharak, which is an RSS terminology for a full-time worker, in the year 1947.

Due to the partition riots, he decided to quit and give up studying law. He was sent as a vistarak that translates to a probationary pracharak, to Uttar Pradesh. He immediately started working for the newspapers and journals of Deendayal Upadhyaya, Panchjanya (a Hindi weekly), Rashtradharma (a Hindi monthly), and also in the dailies Swadesh and Veer Arjun.

In the month of November 1995, the BJP President Advani nominated Atal Bihari Vajpayee as the prime minister candidate, which made him nervous and unhappy at the same time.

Later on after getting the support, when Vajpayee finally came into the power and was about to form the government, their structure collapsed due to the lack of the majority of the members in the Lok sabha. He resigned after that serving for just 16 days as the 10th and first non-congress prime minister of India.

This time also backed with strong support; the Vajpayee government stood on the pillars of ShivSena and All India Anna Dravida Munnetra Kazhagam. Until the period of thirteen months, things seemed to be smooth enough when finally after that All India Anna Dravida Munnetra Kazhagam party revoked its support under the leader Jayalalithaa. Due to active oppression and opposition, Lok Sabha was again dissolved for yet another fresh elections.

In the month of May 1998, India carried out five underground nuclear test experiments in the Pokhran desert in Rajasthan. This test was right 24 years after its first nuclear test that was coded as Smiling Buddha in the year 1974.

Right in the next two weeks, Pakistan jumped in and replied with its own nuclear tests making it the newest nation with declared nuclear capability. While some few countries, such as France, endorsed India's right to defensive nuclear power, other nations that include the United States, Britain, Canada, Japan, and the some of the other European Union forced sanctions on information, resources and technology to India.

Despite all these sharp international criticism and a steady drop down in foreign investment and trade, the nuclear tests arose to high popularity domestically. As a consequence of which, the international sanctions were taken back after six months.

During his time as prime minister, Kashmiri shepherds spotted the presence of militants and non-uniformed Pakistani soldiers in the Kashmir valley trying to get control and command over the territory. This event invited massive destruction which was later known to be as Kargil war. In the Kargil war, in completely cold weathers, many Indian soldiers fought for the nation and around 500 of the Indian soldiers sacrificed their lives to protect the country. In response to this, about 600-4000 Pakistani militants and soldiers died as well.

Finally, after writing a letter to Bill Clinton, during the time of Kargil War, Bajpayee clarified saying that if Pakistani Army doesn't withdraw over this, they are going to end the war in one way or the other. This stanza of Atal Bihari Vajpayee directly targeted to mean that if the Pakistani Army tries to cross the line of control, the war will be just more than a typical war, and massive weapons like nuclear weapons would be used.

Right after Pakistan suffering from heavy war losses and both the United States and China disagreeing to push or threaten India for the war, Pakistan's Prime Minister General Nawaz Shareef revoked the war and asked remaining militants to withdraw the war near to LOC. The militants didn't want to accept the orders of Nawaz Sharif, but the northern light infantry soldiers switched back. Later on, the ones who had already crossed the LOC were either killed by the armies or were forced to withdraw.

Vajpayee experienced a stroke in the year 2009, which destroyed his speech. His health had been a significant source of concern, and he became a wheelchair user and failed to recognise people as well, sooner.