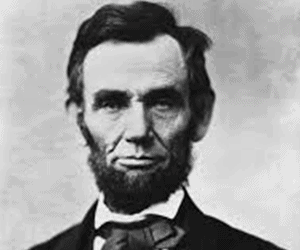 If you are willing to know about the political history of America, then the name one which will outshine again and again is Abraham Lincoln. He is one of the greatest and powerful presidents of America. He is considered one of the top three presidents of the United States. Based on the presidential rank poll of 1948, he has been rated at the top.

In Kentucky, he was born in the year 1809 on February 12 to Thomas Lincoln and Nancy Lincoln. He had an elder sister named Sarah. His father used to work hard and his relentless effort made him one of the richest men.

As far as his education is a concern, then it is reported that he did not have more than 18 months of formal education in his life. His parents were illiterate but they encouraged Lincoln to study. He was an avid reader and he read all the books like the Bible and so on.

His first love was Ann Rutledge and they shared a cordial relationship but end due to her death on 25th August 1835. Then in 1839, he met Mary Todd and they married on 4th November 1842. The couple was blessed with four sons.

Lincoln moved to New Orleans in 1832 and bought a small store with his friend but it was not profitable for him and then he sold his shares. After that, he began campaigning.He gained popularity through his storytelling skills and he also served in the ‘Black Hawk War’ as a captain in the ‘Illinois Militia’. After working as a postmaster and county surveyor, he started pursuing his dream to become a lawyer. To gain knowledge about the field, he started reading law books.

In 1834, his second campaign turned out to be successful because he won the election and representing the team ‘Whig party’. Then in the year 1836, he moved to Springfield and there he started practicing law under John T Stuart. As a lawyer, Lincoln’s reputation grew leaps and bounds. Within a short period of time, he became known for his tough and challenging cross-examinations and closing arguments.

Lincoln’s political career was progressing steadily as well. His rising popularity and great work helped him to get a seat in the US House of Representatives in 1846. As a true ‘Whig’ supporter he always stood by his party’s policies. Lincoln was against the ‘Mexican-American War’ and opposed the views of president Polk. His stand against the president earned him negative publicity and because of that, he lost his political support within his district.

Then, in the year 1848, he supported General Zachary Taylor for the Whig nomination. After winning the election, Lincoln lost to Justin Butterfield and lost the opportunity to be the commissioner of the general land office. Lincoln’s career as a lawyer was growing steadily. After that, Lincoln made a comeback to his political career in 1850 and he strongly opposed the ‘Kansas- Nebraska Act’ and he also argued with national congress for not playing any role in that matter. In 1856, ‘Republican national convention’, Lincoln was second in the contest to become the candidate for vice president. After that in 1858, he won the state republic party’s vote and he became the US senate. Because of this, the lincoln-Douglas debates increased.

They both were different from each other in terms of their political outlook. On one hand, Lincoln advocated the abolition of slavery and on the other side, Douglas promoted his Freeport doctrine. In 1860, he was elected as the 16th president of the united states and in the next year, he became the first-ever president from the “Republican party’. After getting maximum support from north and west, Lincoln entered into the ‘white house’. He refused to recognize the confederacy, declaring the south’s secession illegal. He stood for his stand for free-soil and slave-free states.

His idea regarding the slave free nation was undermined by the constitution and by the south. And to put this thing to an end, he offered the states compensated emancipation in return for their probation of slavery. In July 1862, the ‘second classification act’ passed for the slaves were guaranteed freedom. The purpose of this act is to weaken the rebellious war that the opponents had brought out. On September 22, 1862 ‘The Emancipation Proclamation’ was officially issued and came into practice on January 1, 1863. In the same year, Lincoln and republicans attained partial victory. Due to the unstable economic condition and civil war, Lincoln’s re-election as the president was uncertain. But, because of his effort, he gained support from all but three states and managed to win 212 out of the 233 electoral votes.

The tragic incident occurred during the time of screening the play ‘our American cousin’ where he was present but his main bodyguard Hill Lamon was not present and john parker was one of the four men detailed to act as lincoln’s bodyguard. Parker left him unguarded during the time of interval. He shot Lincoln at a point-blank range on his head and he then stabbed major henry Rathbone and escaped. He was in for 9 hours and then he died on 15th April 1865.

His body was wrapped in the flag and escorted to the white house. He made his final journey with his son. He was interred at the ‘Oak Ridge Cemetery’ in Springfield, US, and his tomb is called Lincoln’s tomb. ‘Lincoln memorial’ was constructed in Washington DC and it is one of the most famous and visited memorials.

Lincoln believed that majority rule had to be balanced by constitutional checks and limitations. He was the first president to be born out of the thirteen states. He is also responsible for the institution of ‘thanksgiving day’ in the United States of America because he declared that the final Thursday in November will be celebrated as ‘thanks giving day’. There is no doubt that he played a vital role in the unification of the states.