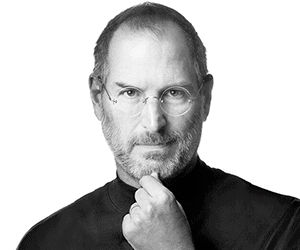 Some people are truley born to be a legend, changed the perspective of the world by their legendary work. Steve Jobes is one of them.He is truley a dianamic and global icon. Not only in one business but also he make everything gold that he touched. His outstanding contribution has brightened American Economy. He was recognized as one of the best entrepreneur globaly, which makes not only America but also the entire world proud.

Steven Paul Jobs was born on February 24, 1955 to Abdulfattah Jandali and Joanne Schieble, and was adopted by Paul Clara Jobs. Jobs biological father, Abdulfattah John, grew up in Homs, Syria and was born into an Arab Muslim houshold. Mona Simpson, Jobs biological sister, notes that her maternal grandparents were not happy that their daughter was dating a Muslim.Walter Lsaacson Steve Jobes official biographer, additionally states that Schieble’s father “threatened to cut Joanne off completely", if she continued the relationship. Jobs was a coast guard mechanic. After leaving the coast guard, Paul Jobs married Clara Hagopian in 1946. Clara, the daughter of American immigrants, grew up in San Francisco. Paul Jobs attempts to start a family were hatted after Clara had an ectopic pregnency, leading them to consider adoption in1955.

Paul and Clara adopted Jobs and Jobs sister Patricia in the years 1955 and 1957 and the family moved to Mountain View, California, in 1961. Jobs meanwhile admires his father's craftmanship," because he knew how to build anything. If we needed a cabinet, he would built it. When he built omfence, he gave me a hammer so I could work with him. I wasn't that into fixing cars, but I was eager to hang out with my dad." In his childhood Jobs had difficulty functioning in a traditional classroom.He frequently played pranks on others at Monta Loma Elementary school in Mountain View. Jobs would later cradit his fourth grade teacher, Imogene Teddy Hill, with turning him around, " she thought I'm advanced fourth grade class and it took her about a month to get hip to my situation. She bribed me into learning." Though the Jobs family was not well off, they used all their savings in 1967 to buy a new home, allowing Jobs to change schools. The new house was in the better Cupertino school, California. The house was declared a historic site in 2013, as it was the first site for apple computer, as of 2013, it was won by Patty and occupied by Jobs step-mother Marilyn.

In 1968, when he was 13 Jobs was given a summer job by Bill Hewlett after Jobs cold called him to ask for parts for an electronics project. Later in the year 1972 Jobs enrolled at Reed College in portland, Origon. Jobs planned to drop out of Reed because he did not want to spend his parents money on it. After that Jobs continued to attend by auditing his classe, which included a course on calligraphy that was taught by Robert Palladino. Jobs was no longer an official student. In a 2005 commencement speech at Standford University, Jobs stated that during this period, he slept on the floor in friend's dorm rooms, returned coke bottles for food money, and got weekly free meals at the local Hare Krishna temple. In that same speech, Jobs said," If I never dropped in on that single calligraphy course in college, the Mac would have never had multiple type faces or proportionally spaced fonts.

Jobs and Laurene Powell married on March 18, 1991. The pair met in the early 1990s at Standford business school, where Powell was an MBA student. They lived together in Palo Alto, California, with their three children: Reed, Erin, and Eve. Jobs also fathered a daughter, Lisa, with girlfriend Chrisann Brennan in 1978, when he was 23. He denied paternity of his daughter in court documents, claiming he was sterile. Lisa Brennan Jobs later wrote of her childhood and relationship with Jobs in her book Small Fry, published in 2018. In 1980, Lisa wrote, DNA test revealed that she and Jobs were a match and he was required to begin making paternity payments to her financially struggling mother. Jobs did not initiate a relationship with his daughter until she was 7 years old. When she was a teenager, Lisa came to live with her father.

When Jobs was enrolled at Homestead High School, he was introduced to his future partner and co-founder of Apple Computer, Wozniak, who was attending the University of California. In an interview with PC World in 2007, Wozniak spoke about why he and Jobs clicked so well,” we both loved electronics and the way he used to hook up digital chips”. Wozniak said,” very few people especially back then, had any idea what chips were, how they worked and what they could do. I had designed many computers, so I was ahead of him in electronic and computer design, but we still had common interests. We both had pretty much sort of an independent attitude about things in the world.”

In 1976 when Jobs was just 21, he and Wozniak started Apple Computer in the Jobs families garage. They funded their entrepreneurial venture by Jobs selling his volkswagan bus Wozniak selling his beloved scientific calculator. Jobs and Wozniak are credited with revolutionizing the computer industry with Apple by democratizing the technology and making machines smaller, cheaper, intuitive and accessible to everyday consumers. In 1980, Apple Computer became a publicly traded company, with a market value of 1.2 billion dollar by the end of its very first day of trading. Jobs looked to marketing expert John Sculley of Pepsi-Cola to take over the role of CEO for Apple. But something happened with this product and Scully believed Jobs was hurting Apple, and the companies executives began to phase him out. Not actually having had an official title with the company he co-founded, Jobs was pushed into a more marginalized position and thus left Apple in 1985.

After leaving Apple in 1985, Jobs began a new hardware and software enterprise called NeXT, Inc. The company floundered in its attempts to sell its specialized operating system to mainstream America, and Apple eventually bought the company in 1996 for 429 million dollar.

In 1997, Jobs returned to his post as Apple’s CEO. Just as Jobs instigated Apple’s success in the 1970’s he is credited with revitalizing the company in the 1990’s. Apple’s quarterly report’s improved significantly in2007, stocks were worth 199.99 billion dollar a share a record breaking number at that time and the company boasted a staggering 1.58 billion dollar profit, an 18 billion dollar surplus in the bank and zero debt. In 2008, Apple became the second biggest music retailer in America. Apple has also been ranked no.1 among Fortune 500 companies for returns to shareholders.

After all those brilliant discovery he also invented some more amazing technological think like Pixar, iMac, iTunes, iPod, i Phone, i Pad ect.

Battle with Cancer and Death:

In the year 2003, this great person discovered that he had a neuroendocrine tumor, a rare but operable of pancreatic cancer. Instead of immediately opting for surgery, Jobs chose to alter his pesco-vegetarian diet while Weighing Eastern treatment option. For nine months Jobs postponed surgery, making Apple’s board of directors nervous. But in the end, Jobs confidentiality took precedence over share holders disclosure. Early in 2009, reports circulated about Jobs weight loss, some predicting his health issues had returned, which included a liver transplant. Days later, he went on a six month leave of absence. In January 2011, Jobs announced he was going on medical leave. In August, he resigned as CEO of Apple, handing the reins to Cook.

Jobs died in Palo Alto on October 5, 2011, after battling pancreatic cancer for nearly a decade. He was 56 years old.

Steve Jobs a man of substance and also a man of many shades. His immense personality and dedication for his work makes him a outstanding leader and entrepreneur. He was awarded with many prestigious award and motivate billion young stars out there with his inspiring life history. He is a legend in every way. He makes every bit of his life worthy for technology and people out there.