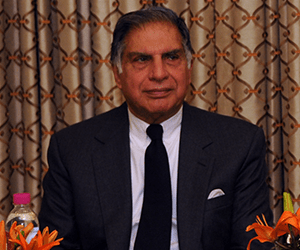 Some people are truly born to be a legend and change the perspective of the world by their legendary work. Mr. Ratan Tata is one of them. He is truly a global icon, not only in business but also in every perspective of his life. He makes everything gold that he touched. His outstanding contribution has brightened Indian economy. He was recognized as one of the best entrepreneur worldwide, which makes India proud today.

This dynamic personality was born on 28th of December 1937 in now Mumbai, then Bombay. The names of his parent’s are late businessman Mr. Naval Tata and Mrs. Sonoo Tata. Ratan Tata’s biological maternal grandmother had been the sister of Hirabai Tata who is the wife of group founder Jamshedji Tata. Ratan Tata’s biological father, Harmushji Tata had belonged to the brooder Tata family. Mr. Ratan Tata therefore was a Tata by birth. His parent’s Naval and Sonoo separated in 1948, when Ratan Tata was 10. Late he was raised by the widow of Sir Ratanji Tata. His grandmother, Navajbai Tata, who formally adopted him through the J.N Petit Parsi Orphanage. Ratan Tata has a half brother, Novel Tata (from Naval Tata’s second marriage with Simon Tata), with whom Mr. Ratan Tata was raised. Gujrati is his mother tongue.

Ratan Naval Tata has been brought up in an old and well known business family. He belongs to a prominent Parsi family. He has not faced any such financial issues since his family had been successful businessman since the British rule in India. Ratan Naval Tata is a highly educated businessman. He holds a bachelors degree in architecture from the CORNELL UNIVERSITY, USA, and has pursued an Advanced Management Program from the Harvard Business School, USA in 1962. After that he joined his family business, the Tata Group. Ratan Naval Tata is 73 years old, unmarried and has been in news regarding several of his relationships. In 2011, Ratan Tata stated, “ I came seriously close to getting married four times and each time I backed off in fear or for one reason or another.“

Ratan Tata’s career graph is very much incidental. Tata began his career in 1961 with the Tata Group, working on the shop floor of Tata steel, shoveling limestone and handling the blast furnace. In 1991, J.R.D Tata stepped down as chairman of Tata Son’s, naming him his successor. During the 21 year’s he lead the Tata Group, revenues grew over 40 times and profit over 50 times, where sales of the group as a whole, overwhelmingly came from commodities when he took over , the majority sales came from brands when he exited. He boldly got Tata Tea to acquire Tetley, Tata Motors to acquire Jaguar Land Rover and Tata Steel to acquire Corus. All this turned Tata from a largely India –centric group into a global business. Ratan Tata resigned his executive power in the Tata Group on 28th December 2012 upon turning 75. Appointing as his successor, Cyrus Mistry, the 44 year old son of Pallonji Mistry of the Sapurji-Pallonji Group. In October 2015 ,he partnered with American Express, investing in Bitcoin Venture Abra. In 2016 , he invested in Nest away and online pet care petrol, Dog sopt. Tata Motors rolled out the first batch of Tiger Electric Vehicles, from its Sanand Plant in Gujarat.

Ratan. N. Tata is 73 years old, unmarried and has been in news regarding several of his relationship, but the big question is “who would eventually succeed Ratan.N.Tata?”Media has been talking about his strive for finding an appropriate successor. In 2011, Ratan Tata stated,” I came seriously close to getting married four times and each time I backed off in fear or for one reason or another.”

Tata is a supporter of education, medical and rural development, and considered a leading philanthropist in India. Tata supported University of New South Wales Faculty of Engineering to develop capacitive deionization to provide improved water for challenged area.

TCS has given the largest ever donation by a company to Carnegie Mellon University for a facility to research in cognitive system and autonomous vehicles. TCS donated 35 million dollar for this grand 48,000 square foot building that is going to be called TCS hall.

Tata Group under the leadership of Ratan Tata formed the Tata Center of Technology and Designed at Massachusetts Institute of technology with a mission to address the challenges of resource constrained communities with an initial focus on India.

Over the years Ratan Tata bagged some terrific awards in his lap. Ratan Tata received the Padma Bhushan in 2000 and Padma Vibhushan in 2008, the 3rd and 2nd highest civilian honours awarded by the government of India. There are some other awards-

Ratan Naval Tata is a man of substance and also a man of many shades. His immense personality makes him a outstanding leader and entrepreneur. He is included by Fortune Magazine among the “ World’s 50 Greatest Leader’s” and featured in the magazines. He is also listing of world’s 25 most powerful business personality. Ratan Naval Tata is not only a tremendous and world class businessman but also a good human being. India is very proud to have this incredible person and businessman.