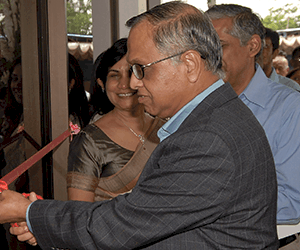 Narayana Murthy founded Infosys Technologies Limited and it is the first Indian company to be listed on an American stock exchange. There is no doubt that N.R.NarayanMurthi is one of the greatest Indian entrepreneurs of contemporary time. Infosys is one of the major It companies which is providing business regarding consulting, information technology and outsourcing services. His passion, hard work, and strategies are the main components that helped to bring the success of this company.

Murthy was born in the year 1946 on 20th August in Sidlaghatta, Karnataka in a middle-class family. His uncle used to work as a civil servant and Murthy’s father wanted him to follow the same line. But, he already had some other and better plans and he always wanted to pursue engineering because that was the new thing in India at that time.

After completing his school, he prepared for entrance examinations of engineering and then the appeared for the entrance exam for the Indian Institute of technology and cleared it with a high rank and also got the scholarship. But, the scholarship was not enough to complete the study properly but his father was unable to afford the fees. Therefore, because of this situation, he joined a local engineering college, the national institute of engineering and completed his graduation in the year 1987 with an electrical engineering degree. After that, he went to the Indian Institute of Technology in Kanpur and earned a master’s degree in the year 1969. During his course, he got the chance to meet with a famous computer scientist from the US and after the communication, Murthy was completely impressed. This actually inspires him to pursue his career in the IT sector in the future.

After that because of his grades, he was literally flooded with job offers and there were a few numbers of computed science graduates available in India. However, he rejected these entire offers and joined the Indian Institute of Management in Ahmedabad.

He is married to Sudha Kulkarni who is a renowned social activist and along with that, she is also a published author in Kannada and English. They have two children, a son and a daughter namely Rohan Murthy and Akshata Murthy.

He used to work over there for more than 20 hours and the work at this college was hectic but it completely fulfilling and Murthy learned a lot of things from there. In fact, today also he feels that joining IIM was the best decision of his life he had ever made in his career life.

In the year of 1970, he worked overseas and the year when he spent time in Paris that was a great influence on him. There he changed his mentality and concluded that passionate capitalism and large scale of creation of jobs was the only way of removing poverty from India.

From the western countries, he learned a lot but he always wanted to settle down in India and wanted to start a company in his homeland. This is why he started a company namely Softronics. However, his strategy didn’t work and it failed after just a year and a half. Therefore, at that time he joined the Patni computer system in Pune.

But, he always wanted to be an entrepreneur, so again he teamed up with six other software professionals to establish another company “Infosys consultants PVT Ltd.” with a capital of Rs. 10,000 in Pune in the year 1981. But, later in the year 1983, the headquarters of this company shifted from Pune to Bangalore.

He has served as a director on the boards of DBS Bank, Unilever, and ICICI. Along with this, he serves several institutes as a part of their advisory board and council such as Cornell University, the UN Foundation, and Indo British partnership.

In the year 2013, he returned to the company as an Executive Chairman and additional director because without his presence the performance of Infosys suffered. But, later in the year 2014, he left down from this position.

The journey from coming from a simple family to become the CEO of Infosys was not easy. He faced failures, rejection but with his passion and interest to know new things helped him to move forward. His first company failed but that was not the end for him. He waited, gathered some more information about the industry and then again went there to fulfill his dream. Due to his passion and distinguished contribution to the IT sector helped him to win some prestigious awards.