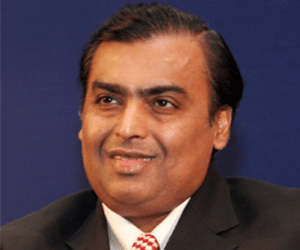 Some people are truly born to be a legend. Change the perspective of the world by their legendary work. Mukesh Ambani is one of them. He is truly a global icon, not only in business but also in various works. He makes everything gold whatever he touched. His outstanding contribution has brightened Indian economy. He was recognized one of the best entrepreneur worldwide ,which makes India proud today.

Mukesh Dhirubhai Ambani was born on 19th of April1957.His parents are Dhirubhai Ambani and Kokilaben Ambani. He was born in Aden,Yemen. Industrialilst Anil Ambani is his younger brother. He has also two beautiful sister’s, Nina Bhadrashyam Kothari and Dipti Duttaraj Salgaocar. In 1958 Mukesh Ambani moved back to India from Yemen because his father Dhirubhai Ambani wanted to start a trending business that focused on spices and textiles. The textile was originally named “Vaimal” but later its changed to “Only Vimal”. Their financial status was not stable until 1970.After 1970 families financial structure was slightly improved. Dhirubhai Ambani later purchased a 14-floor apartment block called “Sea-Wind” in Colaba, where until recently, Ambani and his brother lived with their families on different floors. In his grownup times Ambani enjoyed football and hockey and explore the different areas of Bombay. His father cared little about Ambani’s grades , but more so about his all around performance.

Mukesh Ambani was studied the Hill Grange High School at Pedder Road, Mumbai. He persued Chemical Engineering from the Institute of Chemical Technology, Matunga. Ambani later enrolled for an MBA at Standford University but withdraw in 1980 to help his father built Reliance, which at the time was still a small but fast growing enterprise. He has been quoted as saying that he was influence by his professor Willianm and Manmohan Sharma because they are “ the kinds of professors who made you think out of the box.”

In 1981 he started to help his father Dhirubhai Ambani run their family business, Reliance Industries Limited. The business also included products and services in Metali and telecommunication. Industries. Reliance Jio has earned a top five spot in countries telecommunication services since its public launch in September 2016. As of 2016 , Ambani was ranked 38 and has consistently held the title of India’s richest person on Forbes Magazines list for the past ten years. He is the only Indian businessman on Forbs list of the world most powerful people. He surpassed Jack Ma , executive chairman of Alibaba Group to become Asia’s richest person with a net worth of 44.3 billion dollar on July 2018. He is the first Non-American who was appointed as aDirector-of-Bank of America. He also owns IPL franchise Mumbai Indians and is the founder of ISL a Indian Football League. His resident Antilia is one of the World’s most expensive private resident.

In 1985 he marry Neeta Ambani and have two son, named Akash and Anant Ambani and a daughter, Isha. They have a fairytale marriage. They met after his father attended a dance performance which Neeta took part in and thought of the idea of arranging a marriage between the two. His wife, Neeta, describes him as very quiet, modest and shy. As his father took timeout of his busy schedule for his children, Ambani makes it a top priority to spend quality time with his children and family every Sunday.

Mukesh Ambani along with his wife Neeta Ambani often reaches out to the government for various social causes like last year they showed concern towards sport in education. When the whole nation was deep in shock of Pulwama attack Mukesh Ambani announced his donation and extended services for the martyr families. Mukesh Ambani is the reason the internet and technology reached everyone in the country, remember Jio free internet in the country. There are many of his social work on thet the people of the nation can proud off.

Over the Years Mukesh Ambani bagged some terrific awards in his lap. Mukesh Ambani received some national and international prestigious award for his excellence in business.

Mukesh Ambani is a man of substance and also a man with many shades. His immence personality makes him an outstanding leader and entrepreneur. He is named as world’s most influential person. India is very proud to have such a great leader as Her own.