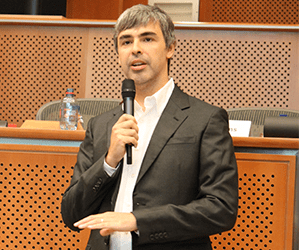 Some people are truley born to be a legened, change the perspective of the world by their legendary work. Larry Page is one of them. He is truely a global icon. Not only in business but also he makes everything gold that he touched. His outstanding contribution has brightened global economy. He was recognised one of the best entrepreneur in everytime, which makes not only America but also the whole world proud on him.

Larry Page was born on 26th of March, 1973 in Lansing, Michigan. His father is Jewish but his metarnal grandfather later made Aliyah to Israe. However he dosenot follow any formal religion. His father earned a PhD in computer science from the University of Michigan, when the field was been established and BBC reporter described him as a " pioneer in computer science and artificial intelligence". He used ton be a computer science proffesor at Michigan State University and his mother, Gloria, was an instrutor in computer programming at Lyman Briggs college of Michigan State University. In an early interview Page describes his childhood , nothing but his house " was usually a mess, with computers, science and technology magazines all over the place, " inshort an environment in which he immersed himself.

Page was first attracted to computers when he was six years old and he used to play the stuff lying around, the first generation personal computers that had been left by his mother and father. He became the " first kid in his elementary school to turn in an assignment from a word processor." Later he said that " from a very early age, I also realized I wanted to invent things. So I became really interested intechnology and business. Probably when I was 12, I knew I am going to be start a company eventually."Page attended the Okemos Montessori School from 1975 to 1979. He graduated from East Lansing High School, in 1991. He holds a Bachelor of Science in Computer Engineering from the University of Mishigan, with honors and a master of science in computer science from Standford University.

Afer enrolling in a computer science PhD program at Standford University, Page was in search of a dissertation theme and considered exploring the mathematical properties of the World Wide Web , understanding it's link structure as a huge graph. After that a fellow Standford PhD student, named Sergy Brin, would soon join Page's research project, nicknamed " Back Rub" together they authored a research paper titled " The Anatomy of a Large Scale Hypertextual Web Search Engine." which became one of the most downloaded scientific documents in the history of the internet at the time.

To convert the backlink data gathered by Back Rub's Web crawller into a measure of importance for a given web page. Brin and Page developed Page Rank algorithm and realized that it could be used to build a search engine for superior to existing ones. The algorithm relied on a new technology that analyzed the relevance of the backlink that connected one web page to another. Both of them are used Page's basic HTML programming skills to set up a simple search page for users as they did not have a web page developer to creat anything elaborate. As their search engine grew in popularity among Standford users. In August 1996, the initial version of Google, still on the Standford University website, was made available to internet users.

In 2007, Page married Lucinda Southworth on Necker Island, the Caribbean Island owened by Richard Branson. Southworth is a research scientist and the sister of actress and model Carrie Southworth. Page and his wife have two children, born in 2009 and 2011.On 18 th of February 2005, Larry Page bought a 9,000 square feet Spanish Colonial Revival Architecture house in Palo Alto, Calofornia. In 2009 Page began purchasing properties and tearing down homes adjacent to his home in Palo Alto to make room for a large ecohouse. In 2011, Page bought the 45 million dollar 193 foot superyacht "Senses", which is equipped with a helipad, gym, multilevel sun decks, ten luxury suites, a crew of 14 and an interior design by french designer Philippe Starck.

In 1998, Brain and Page incorporated Google with the initial domain name of ‘Googol’, derived from a that consists of one followed by one hundred zeros re-presenting the vast amount of data that the search engine intended to explore. In that time Page appointed himself as CEO, while Brain’s named Google’s Co-Founder, served as Google’s President.

During his first tenure as CEO Page embarked on an attempt to fire all of Google’s project manager’s in 2001. Page’s plan involved all of Google’s engineers reporting to a VP of engineering, who would then report directly to him.

Before Silicon Valley’s two most prominent investor’s Kleiner Perleins Caufield and Byens and Sequoia Capital, agreed to invest a huge amount in Google. In this time period Page moved aside to assume the president of products role and Eric Schmidt had been hired as chairman of Google in March 2001.

After the announcement of the end of Schmidt’s CEO position, Page once again appointed as a new CEO of Google. As Google’s new CEO, Pages two key goals were the development of greater autonomy for the executives overseeing the most important divisions, and higher levels of collaboration, communication and unity among the team’s.

In this time at list 70 of Google’s products features and services were eventually shut-down by March 2013, while the appearance and nature of the remaining ones unified.

With Facebook’s influence rapidly expanding during the start of Page’s second tenure he finally responded to the competition with Google’s own social network, Google+ in mid 2011.Page also ventured into hardware and Google unveiled the Chrome book in May 2012. The hardware product was a laptop that man on a Google operating system, Chrome OS.

In September 2013, Page launched the independent Calico initiative, a R and D project in the field of Biotechnology. Page announced a major management restructure in October 2014, so that he would no longer need to be responsible for day to day product related decision making. On 10th of August 2015, Page announced on Google’s official blog that Google had restructured into a number of subsidiaries of a new holding company known as Alphabet Inc and Sunder Pichai assuming position of CEO of Google Inc.

Larry Page is a man of substance and also a man of many shades. His immense personality makes him an outstanding leader and entrepreneur. He is included in various leading magazine’s including Forbes “America’s Most Popular Chief Executive”. This person change the whole meaning of internet and change the whole circumstances of the world and all human being and technology is immensely great full for his vast contribution in world business and technology.