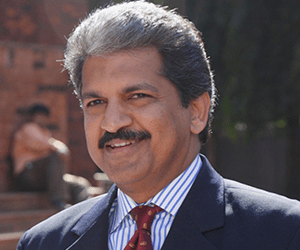 Some people are truly born to be a legend, change the perspective of the world by their legendary work. Anand Mahindra is one of them. He is truly a global icon. Not only in one business but also in many other things. Everything he touched is converted into gold. His outstanding contribution has brightened the Indian economy. He was recognized as one of the best entrepreneur worldwide, which makes India proud today.

In his early career he joined Mahindra Ugine Steel company Ltd(MUSCO) as an executive assistant to the finance director in the year 1981 and the year 1989 he was appointed as president and deputy managing director of the MUSCO. He initiated the Mahindra Group’s diversification into the new business areas of real estate development and hospitality management. After this the evolution of his career has started. On 4th of April 1991, he took the role of deputy managing director of Mahindra and Mahindra Ltd a producer of road vehicles and agriculture tractors in India. And in April 1997 he was appointed as a managing director and in 2001 as the vice-chairman of Mahindra and Mahindra Ltd in 2016 and continued to be the chairman of Mahindra Group. He was a co-promoter of Kotak Mahindra Bank in 2013. As of September 2017 his net worth is estimated to be 1.55 billion dollar. He is an alumnus of Harvard University and Harvard Business School.

Marital Life: Anand Mahindra married Anuradha, who used to be a journalist and later launched the magazine VERVE. She is currently the editor of magazine’s VERVE and MAN’S WORLD. They have two beautiful daughter’s named Divya and Aalika.

Graph of his work is tremendously high. Whatever he touched that transfer into gold. Anand has a keen interest in film making, a subject he pursued as an undergraduate at Harvard. He is also a photographer with a strong interest in films. His immense interest in blues made him create a Mahindra Blues Festival held annually in Mumbai since 2011. Anand promotes Art’s and Cultures and also established an awards platform named Mahindra Excellence in Theater Award and the Mahindra Sanatkada Lucknow Festival, which is a craft exhibition that is held in lucknow annually. Charity or Social Work:

Anand is an advocate of the study of humanities as he believes it can help address various problems in the world which arise due to interdependency. He donated 10 million dollar to support the Harvard Humanities center at Harvard. He is also the founder of his ambitious and gentle project named “NANHI KALI” which aims to provide primary education to underprivileged girl’s in India. As of September 2017, this project has supported 130,000 underprivileged girl’s. Anand Mahindra is also chairman and one of the board of director’s of “NAANDI FOUNDATION” which is a charitable trust that works for the socio-economic development of India. Except of all these work Anand was also invited to join the International Advisory Council of Singapore’s Economic Development Board in 2011. Anand along with Mukesh Ambani and Mahesh Samat was the co-founder EPIC, an Indian television channel in2014 that showcases hindi content. In 2014 Anand was featured in FORTUNE MAGAZINE’S list of the worlds 50 Greatest Leaders and in 2011 he was also in the list of the top 25 most Powerful Business People in Asia. In 2009 he was selected as a co-chairman of WORLD ECONOMIC FORUM. He was one of the contributors for the book “REIMAGINING INDIA” published by Mckinsey and company.

Over the years Anand Mahindra bagged some terrific awards in his lap. Here the list of it- 2004 – Rajiv Gandhi Award of outstanding contribution in the business field and Knight of the order of merit by the president of french republic.

Anand Gopal Mahindra is a man of substance and also a man of many shades. His immense personality makes him a outstanding leader and entrepreneur. He is included by Fortune Magazine among the “WORLD’S 50 GTREATEST LEADERS “ and feature in the magazine in 2011. Listing of Asia’s Most Powerful Business People. Also Anand Kumar Mahindra was noted by Forbes(INDIA) as their Entrepreneur of the year of 2013. India is very proud to have such an outstanding personality. He is not only a successful businessman but also a very dotting family man also great leader.