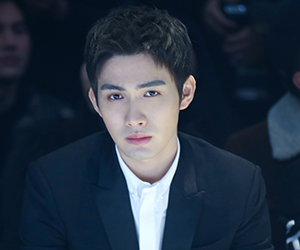 Vin Zhang is a beginner model and actor in the Chinese film industry. He may not be very popular when one looks at the top actors of the Chinese movie industry, but within his four years of career, he has got a lot of attention around his fans and spectators.

Vin Zhang was born on the 19th of January in the year 1993 in the city of Wuxi, China. Though there have been tons of rumours about how he spent his childhood days, no solid information about his early life is available as such now.

He completed his graduation from Shanghai theatre academy that is a public university in Shanghai, which is entirely dedicated to dramatic art education.

He came into popularity after his role in the Chinese drama "V love," which became a grand success providing the actor with the sense of recognition and fame he deserved. The show was launched in the year 2014. He also showed his passion and interest in the music line when he joined and started his production in creating the soundtracks.

People have been rumoring about his relationship with Dilraba Dilmurat, who was also a co-star with him in the show "The King's Woman."

Some of the sources say about Zhang that he has been highly willing to make his career in soccer and outdoor sports. But within a few years of play, he decided to switch it from games to the entertainment industry. Right after making a sound decision and changing off the gears, he chose to skyrocket his acting career from the ‘Shanghai Theatre Academy’ in the year 2013 and launched a TV career soon after.

Zhang made his first appearance in his acting career by playing as a supporting role in the web drama series 'V Love" that was first aired in the year 2014 on "Tencent." In addition to this, to support and popularize his web series, he also released two singles, "Our Era" and "Heavenly Stairs." The same year, he also performed a minor role in "Love's M Turn."

In the year 2015, Zhang got an opportunity to go for the first time and appear in as a lead role "Qiao Ran," in the web drama "Long Time No See," which was mainly based for youth and which is also the sequel to "Fleet of Time."

2016–present: Following the path to be a superstar

Zhang featured in the traditional melodrama Chronicle of Life in the year 2016 in February. He was accompanied in this show by the co-stars Hawick Lau and Zheng Shuang. The series acquired high ratings, and netizens and fans of the original novel applauded and praised Zhang for his genuine portrayal of the novel character. For Zhang, this was not the stop alert as he gained even more recognition for his role as a mysterious hacker in the hit romance comedy-drama "Love O2O." With his portrayal of three different and striking roles in Love O2O, "She Was Pretty" and "Eternal Love," Zhang earned a lot of appraisal for his talent in acting by both the media and fans.

In the year 2017, Zhang featured in romance comedy "Pretty Li Huizhen," which was a Chinese remake of South Korean series "She Was Pretty." He worked here with the co-stars Dilraba Dilmurat and Peter Sheng. He played the role of a goofy and free-spirited editor. He then also featured in the hit fantasy romance drama "Eternal Love," playing the role of a devil and wicked prince.

Later in the same year, 2017, Zhang featured as the male lead in traditional drama "The King's Woman" with the co-star Dilraba Dilmurat, playing "Qin Shi Huang." He earned critical reviews for his depiction of the overbearing yet loyal emperor. In the year 2018, Zhang didn't play in many shows or movies. One of the significant parts was when he was featured in the wuxia romance-drama "The Flame's Daughter."

Finally, in the year 2019, Zhang performed the male lead in wuxia romance drama "I Will Never Let You Go" with the co-star Ariel Lin. He has also been working in other shows and was featured in the romance workplace drama "Love Is Fate," as well. Zhang also became the part of philanthropy and engaged in a 2017 public welfare project focused on the environment.

He also visited the 2017th edition of the "BAZAAR Stars" "Charity Night," directed by "Harper's Bazaar China," along with some other well-known celebrities from China. Vin Zhang is also an excellent friend of his co-star Dilmurat, who worked together in "The King's Woman." Apart from the fantastic on-screen chemistry they showed, their off-screen dynamics have provided rise to endless dating stories that neither of them has confirmed. In the year 2018, Zhang was also rumoured to be dating his own manager, causing significant public backlash from all his fans. If those reports are to be believed, it suggests that they have been in a relationship for some time.

Zhang is supposed to appear also in the period suspense drama "Eight Strange Cases of the Republic," cyber-security drama "Storm Eye," and the fantasy suspense "drama Si Teng." These shows may air this year or in the year 2020.

Zhang has been part of many single discographies that include "Our Era," "Heavenly Stairs," that were cast in the year 2014.

These discographies have been quite popular around China and helped Zhang kick boost his acting career.