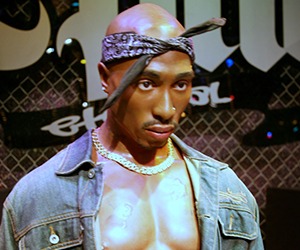 Tupac Shakur is an American rapper and musician, who was born in Manhattan, New York City. Later on, he migrated to San Fransisco, Bay Area. Unlike other rappers, most of his raps addressed social injustice and inequality matters. His raps have been set to title him as one of the greatest rappers of all time.

At the time of his birth, the name given to him was Lesane Parish Crooks. Later after he joined the black panther club, his mother renamed him Tupac Amaru. Again, he took his actual surname "Shakur" from his sister's dad, who was Mutulu Shakur.

Shakur performed in many raps in his short-lived rapping career, before he was murdered to death. On the 7th of September, the year 1996, he was shot dead by an unknown shooter who is yet not identified. He was shot six times to his chest, and within the next six days, he was declared dead on the 13th of September 1996. The prime suspect for the case was one of his friends, who was shot too later.

Tupac was born in the month of June 16, 1971, in Manhattan, New York City. His mother's name was Afeni, who was parenting two children, entirely on her own, and struggled so much for the money. The family switched their homes oftentimes and sometimes even resided in small shelters.

Tupac commenced his music career as a revolutionary cause to bring out the exploitations and injustices faced by many African-Americans. His unusual way of expressing his ideas and beliefs made him the spokesperson not just for his own generation but for the upcoming ones as well, who used to have the same conflict and fight for acquiring equality.

The biggest battles he fought in life were, most of the time with himself. His oscillating faith brought him towards the repudiation of gangsta rap and then ended up falling into the arms of the controversial Death Row Records. Later on, the borders between his art and the balance of his life started getting a lot more blurred than ever, which ended up with the tragic death.

Her mother, Afeni Shakur, wanted him to hold the name of revolutionary, congenital people in the world. She desired him to know that he was a piece of the entire world culture and not just from a neighborhood.

His birth took place right after his mother was accused for more than 150 charges for Conspiracy of United States government officials and also New York City landmarks. This case was carried forward and proceeded in the New York Panther 21 trial. Both of his parents were highly active members of the Black Panther Party in New York City in the late months of the year 1960s and early months of the year 1970s.

At the age of just one year, his renaming was based on the 18th-century revolutionist "Túpac Amaru," who was highly active in the 18th-century Peruvian revolutionary. Later on, the same person was executed because of leading a native uprising protest against Spanish rule. "Tupac" is a term that derives from Quechua "Thupaq," which in English means "Royal."

Along with Tupac, many of his friends and families were highly associated and engaged with the Black Liberation Army. Some were found and convicted of severe criminal offenses and jailed for longer times, including his own mother. His godfather, who was a high-ranking Black Panther, had been sentenced to jail for murdering a school teacher during a small robbery in the year 1988.

Later on, his sentence was revoked due to authorities and some uncertain pieces of evidence. His stepfather, who was Mutulu Shakur, also spent about more than four years in jail, and he was also on the FBI's Ten Most Wanted Fugitives list, that came up in the year 1982. Mutulu helped his friend Assata Shakur, who was Shakur's godmother, to move out of a prison in New Jersey in 1979.

Due to this act, he was listed under wanted criminals of New Jersey. After so many catch attempts, finally, in the year 1986, he was caught and then convicted to prison for his robbery of 1981, where he attacked and robbed Brinks armored truck. During the same incident, two police officers and a guard were killed.

Shakur developed and was involved in a close and strong friendship with Jada Pinkett, who later known to be Jada Pinkett Smith. Their friendship continued until his tragic death. A documentary film was made on his execution and early life: "Tupac: Resurrection." In the same documentary, Shakur talks about Jada, saying that she is his heart. He also mentioned that she would stay to be his friend for the rest of his life. Jada Pinkett Smith calls him one of her best friends all her life. Shakur was like a brother to her. It was a lot more than and beyond just friendship for them. The type of relationship they had, one can only get that once in a lifetime. Shakur also wrote a poem that was titled "Jada," which appeared in his book, "The Rose That Grew from Concrete." In the same book, the poem that was written on Pinkett Smith has also been included and is titled as "The Tears in Cupid's Eyes."

Though there are many awards received by Shakur, most notifiable came to him after his deaths. These include:

Tupac Shakur was assassinated and murdered and shot with 6 bullets. His murderer is still unknown to the world. He died after spending six days in hospital after he was shot on 7th September 1996. He died on 13th September 1996.