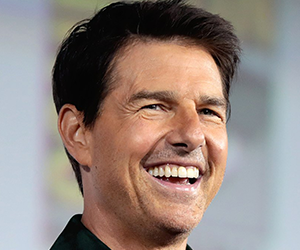 Tom Cruise is an American actor who gives many box office hits such as Risky Business, A few good men, mission impossible franchise and many more. In the United States, he is one of the biggest movie stars and he is the highest-paid actor in the year 2012. His dream was to be a priest but destiny had some other plans for him and today he is one of the greatest Hollywood actors. Within a very short time, he became one of the big stars in Hollywood but with the role of secret agent Ethan Hunt in mission impossible, he reached another level of his popularity.

The actual name of Tom cruise is Thomas Cruise Mapother. He was born in the year 1962 on 3rd July in Syracuse, New York. His father was Thomas Mapother and his mother was Mary. His mother was an amateur actress and along with this, she was working in a school and his father was an electrical engineer. His parents divorced when he was only 11 years old and then he moved with his mother to Kentucky and then after her second marriage, he moved to New Jersey.

When he was 14 years old, then he enrolled himself in a Franciscan seminary because then he wanted to become a priest but after a year he left.

He had dyslexia and because of that, his academic career was not easy at all. He wanted to pursue his career in a professional career. But, due to his knee injury, he was unable to fulfill his dream. He enrolled himself in a drama school and his teacher encouraged him a lot after seeing his gifted acting ability.

Apart from his marriages, he was in a relationship with actress Penelope Cruz and NazaninBoniadi.

When he gave up the idea of becoming a priest and then, he decided to try his luck as an actor. He moved to new york and bagged a small role in the year 1981 in the film endless love and he played 19-year-old boy’s role.

After playing the small roles in a few more films, then he portrayed Joel Goodson in the year 1983 in ‘Risky Business’. It was a romantic comedy film. The films became a big hit and Tom cruise able to win the heart of many American girls by his chocolate-boy good looks.

After that, he appeared in the action-drama film ‘Top Gun’ in the year 1986 and in that film he played the role of Lieutenant Pete ‘Maverick’ Mitchell a young naval aviator aboard the aircraft carrier USS enterprise. This movie was a superhit and after that movie, Tom Cruise became a superstar.

When in the year 1996, he played the role of Ethan Hunt in his action spy film Mission impossible, and then he achieved huge success in his entire career. The plot of that film was interesting and it is based to find out the mole who has framed him for the murders of his whole team. Due to the box office success, the makers decided to make several sequels of that film.

There are many films which Cruise did in late 1990 and 2000. Some of the successful films of his career are Eyes wide shut, the last samurai, collateral, war of the worlds and lions of lambs.

After that, he did Rock of Ages in the year 2012 which was a hit film in his career. Along with this, some of his recent films are Jack Reacher, Oblivion and edge of tomorrow.

The mission impossible franchise is still going on. In the year 208, he did the sixth film of this franchise, ‘Mission: Impossible- Fallout’. In 2017, he starred his horror movie ‘The mummy’. Along with this, his war drama plotted film ‘Born on the fourth of July’ in the year 1989 is one of the most famous movies of his career. He portrayed the role of Ron Kovic in that movie and he received several awards for this movie. Additionally, it was a critical and commercial success.

There is no doubt that his best film is Mission Impossible where he played the role of agent Ethan Hunt. It is basically an action spy thriller film. This film helped to maintain the superstar status for Tom Cruise. His contribution to many charitable organizations is completely noticeable. He supported many organizations such as Barbara Davis center for childhood diabetes, H.E.L.P and friars foundation and so on.

In the world film industry, Tom Cruise is undoubtedly one of the big names. His film career can be an inspiration for many newcomers. He was successful and provide his utmost support in much charitable organization. He also received many awards because of his acting and good social works.