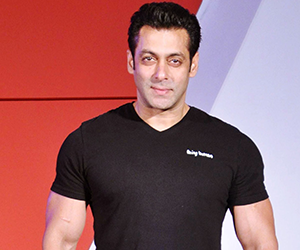 Salman Khan is a famous Indian Bollywood for movie starring and also a Producer. For the past thirty-one years, he has gifted us a series of hit movies. His performance has made him a favorite of many people. He is one of the best paid actors in Bollywood. He has also received numerous national and international awards for his acting skills.

Salman Khan was born on December 27, 1965, in a Muslim family in Indore, Madhya Pradesh. His father Salim Khan was a screenwriter and his mother was Salma Khan whose real name was Sushila Charak, who was a Maharashtrian. Salman's grandfather, Abdul Rashid Khan, was a deputy inspector general of Indore. Salman has two brothers and two sisters. The two brothers are Arbaaz Khan and Sohail Khan. The two sisters are Alvira Khan Agnihotri who is married to actor and director Atul Agnihotri, and another sister Arpita Khan. Arpita Khan is the adopted daughter of Salman's father, who is married to Ayush Sharma.

In 1988 he debuted in Bollywood with his first film 'Biwi Ho To Aisi'. But here he played the secondary character. After that in 1989 he had the opportunity to perform in the lead role in 'Maine Pyaar Kiya'. Actress Bhagyashree starred opposite him in this film. The film was a huge success. The film was dubbed in English, Telugu and Spanish. The following year he starred in the film 'Baghi: A Rebel for Love', which was a success at the box office. In 1991 he had released three consecutive films, 'Patthar Ke Phool', 'Kurbaan' and 'Sanam Bewafa'. All three films were particularly successful. He did not star in any of the films for 3 years. In 1994, he was seen again with the Rajkumar's Santoshi directed film 'Andaj Apna Apna'. Later that same year, he played a role with Madhuri Dixit in the movie ‘Hum Aapke Hain Kyon’. The film was a huge success and won the best film, best director and best actress award. The following year, he and Shah Rukh Khan starrer 'Karan Arjun' was released. Which was created by the story of rebirth and had great success. Then three of his photos were released which was fairly successful. In 1998 he was seen in 'Pyaar Kiya To Darna Kya' and 'Kuch Kuch Hota Hain'. He won the Best Supporting Actor title for the movie 'Kuch Kuch Hota Hain'.

The following year he was seen in 'Hum Saath Saath Hai', 'Biwi Number One' and 'Hum Dil De Chuke Sanam'. His performance in 'Hum Dil De Chuke Sanam' earned him the Best Actor nomination. Also, this movie was the best film of the year and here he is seen opposite Ajay Devgan and Aishwariya Rai. In 2000, he and Preeti Jinta and Rani Mukherjee teamed up with 'Chori Chori Chupke Chupke'. In 2003, another of his films, 'Tere Naam' was released. Which gained great popularity. The following year 'Mujhse Shadii Karogi' was released. Here he plays opposite Priyanka Chopra and Akshay Kumar. He then appeared in the comedy film 'No Entry'.

In 2009 he starred in the film ‘Wanted’ which was directed by choreographer and director Prabhu Deva. Here Ayesha Takia plays opposite him. The film also had success. His next hit movie was 'Dabangg' where he played the role of a policeman. The film was a success and won the Best Popular Film Award, the Best Stardust Award. Next, ‘Ready’ was released in 2011. This movie was the second highest grossing film of the year. The following year two of his films were released. The first is 'Ek Tha Tiger' where Katrina Kaif opposite him. The second film 'Dabangg-2' which is a huge success. In 2014, he and Daisy Shah released 'Jai Ho' and his and Jacqueline Fernandez’s 'Kick. Both films were made a success in box office.

The following year he was seen in 'Bajrangi Bhaijaan'. This movie breaks all movie records. It is a film released after Amir Khan's 'PK' which has entered more than 300 clubs. The same year 'Prem Ratan Dhan Payo' was released. Here Sonam Kapoor played opposite him. This film also had a special success. His next film 'Sultan' was released on Eid the following year. Which turned out to be the Best Picture of the Year. His next films 'Tube Lite' and 'Tiger Jinda Hai' were released in 2017 which were commercially successful. Katrina Kaif has teamed up with him in India to last released film 'Bharat' in 2019. Which has been a special success. His next release is, 'Kick-2', which will be released on Christmas this year.

He is still Unmarried. However, his name is associated with various actresses. First, in 1999, Aishwariya Rai got involved with him. But after two years their relationship broke down. Then he embraces about Katrina Kaif. Then, Salman got involved with Sangeeta Bijlani and Shami Ali. But none of the relationships survived.

In 2008, he hosted the show 'Ten Ka Price'. This show gets huge popularity. Then in 2010 he started hosting the 'Big Boss' show. The show's TRP grew after he managed it.

He has worked as a brand ambassador for brands such as 'Limca Soft Drinks', 'Hero Honda Bike', 'Thumbs Up', 'Mountain Dew', 'Jatra.com', 'Nabaxi Revital'.