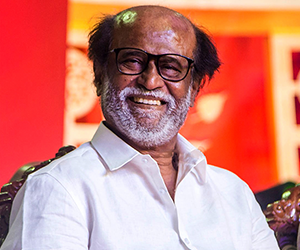 Rajnikanth is one of the most influential and bankable Indian movie stars. His mass popularity and appeal have increased because of his mannerisms and his style to deliver dialogue. He received India's third-highest honor, the Padma Bhushan for his limitless contribution towards the Indian cinema. Along with acting in the cinema, he also has an interest as a screenwriter, film producer and also a playback singer. There is no doubt that a man who started his journey from the zero levels has now become one of the most prominent faces in the Indian film Industry.

ShivajiRaoGaekwad is now known as Rajnikanth was born in Bengaluru, Karnataka in the year of 1950 on 12th December. He was the fourth child of his parents. He is a Marathi by birth but he hadn’t done any movies in the Marathi language. His father, RamojiRaoGawkwad was a police constable and his mother was a housewife. His mother died when he was only eight years old.

He completed his study from AcharyaPathsala in Basavanagudi, Bangalore and he joined into Vivekananda BalakaSangha. During the time of his schooling at Bangalore, he was enrolled in Ramkrishna Math by his elder brother. His interest in doing theatre grew over there. But, when he did his initial performance as Ekalavya’s friend from the Hindu epic ‘Mahabharata’ from then, he decided that he will choose acting as a profession. He also praised for his role. His performance even appreciated by the Kannada poet D.R. Bendre. Apart from this, he also played the villainous role of Duryodhana from the play Kurukshetra in his school.

He was always a film buff and this is why in the year of 1970 he moved into Madras to join the Madras Film institute and there he trained as an actor.

He married Lata in 1980 who is an English literature graduate and she is coming from a decent Iyengar Family. She has two daughters namely Aishwarya and Soundarya who are kept away from the limelight. The couple involves themselves in charity.

After completing his schooling life, he took up several anonymous jobs like carpenter, coolie, and bus conductor after recruited by Bangalore Transport services. But, all this time, his passion for acting was never faded. In the beginning days of his acting career, he began to take part in the mythological Kannada stage plays which were offered by the playwright topimuniappa. When he was pursuing his acting training in Madras Film institute, then he got recognized by the famous Tamil director K Balachander who advised him to learn Tamil and Rajini followed this quickly.

After that, in the year 1975, he cast him in his national award-winning film ApoorvaRaagangal and after that, there was no looking back for the talented actor. He appeared in that movie just for fifteen minutes with a beard and beedi for the shot. No one on their wildest imagination would have thought that this man will rule the Kollywood industry one day.

He did so many movies in Tamil but the earlier days, he was only offered to play the negative roles in the movies. His performance and roles were appreciated and then he started getting more offers not only from the Tamil industry but also Telegu and Kannada film industries. He took up the supportive roles or negative roles and mostly pairing with Kamal Hassan. He used to play the role of a negative character where he was portrayed as either womanizer or any other form of negative role. He appeared more than 20 films in the year 1978 in the three industries.

After getting advice from Kamal Hassan, in the year of 1977, he first played a positive role in the film ‘BhuvanaOruKelviKuri’ and the director of the movie was S P Muthuraman. In this movie he played the role of a villain in the first half and in the second half he played as a refined man. The success of this movie helped him to get another melodrama in the year 1979. The name of the movie was ‘’Aarilirunthu” directed by S P Muthuraman.

Rajini was primarily in doubt about the acceptance of the audience. But, the movie proved a hit in the box office and then he earned a good name among the critics. These two movies turned his career. After establishing himself as a lead actor in this industry, he earned the title of ‘superstar’ but when he was at the peak of his career, then he decided to quit his acting career and this sent shock waves to his fans. But, later he was convinced by Kamal Hassan and Balachandar and then he decided to move on with his career.

He started his second innings with ‘Billa’ in 1980 which was a super-duper hit and he became a full-fledged actor from there. Later he did several movies like ‘Pokkiri Raja’, ‘NaanMahaanAlla’, ‘MoondruMugam’ and so on. NeetiKann is one of the milestones of his career which was directed by K Balachandar. Apart from Kollywood, he has acted in some Hindi movies such as ‘Hum’ in 1991, then ‘Sivaji (2007),’ after that, in 2016 he did ‘Kabali’ and last he did ‘2.0’ in 2018.

Apart from his contribution to the Indian film industry, he contributed so much to several humanitarian causes. He donates much of his profits to charity without publishing them. There is a lot to learn from Rajinikanth. A person can become successful only by his action and passion and he is the best example of this.