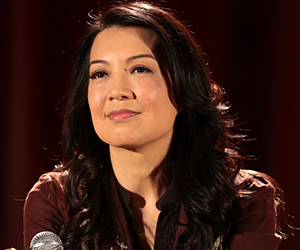 Ming Na Wen is an American on-stage and voice actress popularly known for her work as Melinda May in the Action Drama Series, "Agents of Shield" that was created by ABC. She is also famous for her voice role as Disney Princess Mulan in the animated adventure action "Mulan." Other than this, her other well recognized works include the role of Mulan in the video game Kingdom Hearts II that was released in the year 2005, then in another animated series: "Sofia the First" which was launched in the year 2014, and finally, "Ralph Breaks the Internet" that was released in the year 2018.

She also played a wondrous role as Detective Ellen Yin in "Batman the animated series." In the year 1990, she married to American Film writer, Kirk Aanes. Later the chemistry didn't go well, and they ended up divorcing in the next three years in 1993. Right after that, on the day of 16th June 1995, she remarried to Eric Michael Zee. Together they are living a happy and peaceful life with their daughter Michaela Kaitlin, who was born on the day of 21st November 2000 and then a younger son Cooper Dominic Zee, who was born on 12th October 2005.

Ming Na Wen was born on the day of 20th November 1963 in the city of Coloane, which is very popularly recognized as one of the two chief islands of Macau. Her parents divorced when she was a baby, and she went with her mother, Lin Wen, to Hong Kong. There, Lin Chan Wen remarried, to Soo Lim Yee, and then their family moved to New York City when Ming Na Wen was just at the age of four years.

After the next five years, her mother and stepfather shifted again to Pittsburgh, near the Pennsylvania area, where they initiated The Chinatown Inn restaurant, which is still running. Brought up in the suburb of Mt. Lebanon, Pennsylvania, she went to Mount Lebanon High School and completed her education from Carnegie Mellon University in 1986.

Ming Na Wen married to American film script writer Kirk Aanes in 1990. But they divorced in the year of 1993. After that she again married to Eric Michael. This couple have two children.

Wen's initial television act was in the children's television series Mister Rogers' Neighborhood in the year 1985. Later from the year 1988 to the year 1991, she played the role of Lien Hughes, who was the daughter of Tom Hughes, on the show "soap opera As the World Turns."

After featuring in the acclaimed 1993 film The Joy Luck Club, she got the role of Dr. Jing-Mei "Deb" Chen on the drama series of NBC ER. She initially featured in a re-appearing role throughout the 1994-1995 season before returning in the year 1999 as a series regular, staying on the show until the midway through Season 11 in the year 2004. Ming Na Wen also played the role of Chun-Li in Street Fighter and co-starred in The Single Guy from the year 1995 to the year 1997.

She presented the voice for the lead character in the 1998 animated film Mulan, and then its direct-to-video sequel, and finally Mulan II, and the video game Kingdom Hearts II, consequently winning an Annie Award. She also voiced for the role of Aki Ross in the computer-animated movie "Final Fantasy: The Spirits Within," and then Detective Ellen Yin in the animated series "The Batman." Later she played as the voice actress for Jade, who was a minor character in the animated series Spawn on HBO.

In the year 2004, she became part of a Hollywood Home Game on the World Poker Tour, and she also won the game. In the fall of 2005, she featured on the NBC drama TV series Inconceivable as the main character, Rachel Lu. However, the series was discontinued after the launch of only two episodes. Following this, she played next in a TV role that was about an FBI agent in the Fox kidnap drama TV series "Vanished," which came up in the fall of 2006 and then was canceled soon three months later. She also performed a small role as a college professor in the comedy drama series George Lopez.

From October 8 through October 29, 2007, Ming Na Wen made her appearance in the four-episode arc of CBS's Two and a Half Men, representing Charlie Sheen's love interest, who was a judge very closer to his own age. In the month of November 2008, she also guest-starred on two ABC series: namely Private Practice and Boston Legal. From December 5–6, in the year of 2008, Ming Na Wen featured in a benefit production of the vocal Grease with "Stuttering" John Melendez that was performed at the Class Act Theatre.

She was also cast as a constant in the Stargate Universe television series, where she played as political attaché Camile Wray from the month of October 2009 to May 2011. Ming Na Wen gave an appearance in Disney Through the Decades, which was a short documentary explaining about the history of The Walt Disney Company through to the present, as the host of the year 1990 section.

Ming Na Wen made her appearance on the Syfy series Eureka as the curious U.S. Senator Michaela Wen, commencing in season four in the year 2011 and playing as a major villain in the fifth and the final season in 2012.