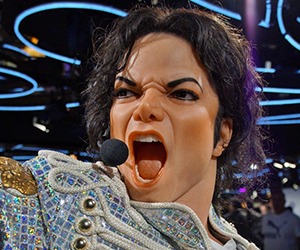 Michael Jackson was a very popular American musician, songwriter, and dancer. He was well known for his exceptional dance moves and several different dance techniques, as well. He was the 8th kid of his family and commenced his career in the year 1964 with his elder brothers, Tito, Jackie, Marlon, and Jermaine. They named their team Jackson-5.

His solo career began at the age of 13 years, in the year 1971 at Motown records. Sooner in the next nine years, in the year 1980, he started to emerge as a very popular public singer and dancer of all time. One of his very famous dance moves, the moonwalk is recognized throughout the world for its charm and elegance. In this move, the person glides backwards slowly while trying to move forward. Earlier, it was known as the glider move and became popular around the year 1983.

Apart from all of this, Michael Jackson has been into many controversies and criticized for his changing appearances, weird relationships, behaviour patterns, and lifestyle.

He has been accused and alleged for sexual abuse many times before he actually died due to an overdose of sedatives. His sexual abuse allegations also included sexual child abuse, as well. Later after his death, his personal physician confirmed the drug overdose.

Michael Jackson was born in the city of Gary, Indiana, near Chicago, on the month of August 29th, 1958. He was the eighth of ten kids in the Jackson house. Jackson's family was more of a working-class African-American person residing to a two-bedroom apartment on Jackson Street. Katherine Esther Jackson (Mother of Michael Jackson), used to play clarinet and keyboard, had a dream of becoming a country-and-western performer, and she also used to work as a part-time at Sears.

Katherine Jackson though spent most of her time as a housewife and a devoted Jehovah's Witness. His father was Joseph Walter "Joe" Jackson, who used to be a former boxer and a guitar musician at earlier times, who eliminated all of his musical ambitions to ensure economic stability for his family and used to work as a crane operator at U.S. Steel. In the meantime, he used to play the guitar with some local rhythm and worked for bands like blues band, the Falcons, to support and raise overall income.

Michael Jackson's great-great-grandfather, whose name was July "Jack" Gale, used to serve as a Native American medicine man, and he also worked as the U.S. Army scout. Michael had three sisters, namely Janet, Rebbie, and La Toya, and the rest five brothers, who were Tito, Jackie, Marlon, Jermaine, and Randy. There was another sixth brother who was actually Marlon's twin. His name was Brandon, but he died shortly after birth.

It won't be any wrong to say, but behind all of the grand success of Michael Jackson, the role of his father was just incredible, Joseph pushed his sons to all boundaries in order to see him succeed. Though many reports and media news also speaks that he has been often known of getting violent with all his sons.

In the year 1978, Jackson shifted to New York City to feature as the Scarecrow in The Wiz. It was a music that was directed by Sidney Lumet. Along with Michael Jackson, the co-stars' list included Nipsey Russell, Diana Ross, and Ted Ross. Although the film ended as a box office failure. Quincy Jones made all the score arrangements. Later on, she also became the producer of three of Michael Jackson's solo albums. During his overall time in New York City, Jackson used to frequently visit the Studio 54 nightclub, where he got the sensation of early hip-hop. This was not just a hip-hop thing as it affected his beatboxing on future tracks. One of the top-rated tracks was "Working Day and Night." In the year 1979, an accident happened that got Jackson to break his nose during a regular dance. Following this accident, it led to breathing problems that had a lot of effect on his career. His operator was Steven Hoefflin, who operated Jackson's following operations.

"Off the Wall" was Michael Jackson's 5th solo album that was released in the year 1979. It also led to the establishment of Michael Jackson as a solo performer. This changed Michael and turned him to go from the old traditional bubblegum pop of his youth to even more complex notes. The year 1979 was definitely the luckiest year of Michael Jackson as it produced 4 top hit list albums in the USA hit list. These albums included "Off the Wall," "She's Out of My Life," and on the other hand, chart-topping singles included "Don't Stop 'Til You Get Enough" and "Rock with You." Sooner the album entered number three on the US Billboard 200 and traded over 20 million copies all around the world. In the year 1980.

Michael Jackson died on 25th June 2009, due to the cardiac arrest. His personal physician gave him lots of medications to assist him with stress-free sleeping and relaxation. Suddenly around 12:22 pm, 911 was called as his breathing was stopped after which within two hours he was declared dead.