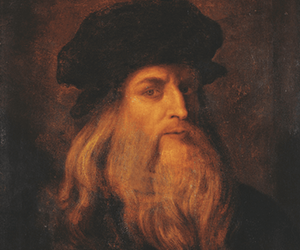 Leonardo had no formal training or proper certification in his domain of expertise. Yet he was considered to be an individual of unquenchable curiosity, a universal genius and what not. Leonardo's sketches, portraits, scientific diagrams and his mysterious and profound ideologies on the nature of painting brought the level of art and imaginative scriptures to an entirely different level.

His multidisciplinary expertise and his vision of perceiving the universe and its mysteries were entirely wonderous for the general public. The scope and extent of his interests were without precedent in documented history, and his thinking, personality and mindset were never less than that of a superhuman. His strong fundamentals about the physical working of the world and its dynamics supported all his arguments very logically and in a way that one could relate and understand quickly.

The painting of Mona Lisa is undoubtedly the best work in his entire painting career. His painting "The Last Supper" is the most reproduced sacred painting of all time. His drawing of "Vitruvian Man" is none less than a cultural icon.

Although most of his painting are scrapped and about 15 successful pictures which survived long after his death, he is still considered one of the greatest painters of all times. His way of conveying the message through his paintings is something he was very good at. Some of his paintings were so mysterious that people in present-day still struggle to crack their actual meaning.

He conceptualized and visualized flying vehicles, armoured fighting vehicles, utilizing solar power, adding machines and the double hull. Relatively few of his designs were made due to the low feasibility of manufacturing during his existence, as the modern scientific approaches to engineering, crafting and fabrication were only in their origin during the Renaissance.

Unnoticed, some of his inventions were introduced into the market, which was not well recognized throughout the society as his inventions. These included an automated bobbin winder and a tensile strength tester for the wire. He is also sometimes credited with the design and inventions of the helicopter, parachute, and tank. He made important discoveries in hydrodynamics, civil engineering, geology, optics, and anatomy, but never published about them, and also, they had little to almost no direct influence on subsequent science.

Leonardo Da Vinci was born in the region of Florence and acquired his education in the studio of Florentine painter Andrea del Verrocchio. His most of the early life passed in the service of Ludovico il Moro in Milan. He later worked in Rome, Venice, and Bologna, and he contributed his final years in France at home, which was awarded to him by Francis.

Leonardo Da Vinci was born in the region of Florence and acquired his education in the studio of Florentine painter Andrea del Verrocchio. His most of the early life passed in the service of Ludovico il Moro in Milan. His father married four women after his mother. Albiera Amadori was the first woman after his mother, and she was very affectionate to Leonardo, but she died very early.

Later on, when Leonardo was 16, his father married again to Francesca Lanfredini, who died soon as well without bearing any children. Leonardo's third stepmother Margherita di Guglielmo was the one who gave birth to six children. Then his father married to fourth and final wife, Lucrezia Cortigiani, with whom they again had six more kids. In total, Leonardo had 12 siblings with a vast age difference between them and Leonardo.

Leonardo spent his early childhood days at his mother's place with his father, grandparents and uncle in the small town of Vinci. He later worked in Rome, Venice, and Bologna, and he contributed his final years in France at home, which was awarded to him by Francis.

At the age of 14, in the middle of the 1460s, Leonardo's parents relocated to Florence, where he became a Garzone, which is a metaphor for a studio boy. He worked in the workshop of one of the leading Florentine painter and sculptor of his time.

In the early months of the year 1478, Da Vinci got an independent commission offer about painting the altarpiece for the Chapel in the Palazzo Vecchio, which allowed him to operate independently from Verrocchio's studio.

Leonardo also served in Milan from the year 1482 to the year 1499. He was paid to paint the Virgin of the Rocks and The Last Supper, which was to be put in the monastery of Santa Maria Delle Grazie. During the spring season of the year 1485, Leonardo moved to Hungary to meet Matthias Corvinus on behalf of Sforza and was paid to paint a Madonna.

Leonardo finally returned to Florence, where he joined back Guild of Saint Luke in October of 1503. In the same month, Leonardo also started operating on portraiture of Lisa del Giocondo, who later became the model for the Mona Lisa, which he continued working until his twilight times. He was also an active member during the early months of 1505, who used to decide about the placement of David's statue. Spending his next two years in Florence, he worked on designing and painting a representation of The Battle of Anghiari for the Signoria, along with creating its companion piece.

On the day of 2nd May 1519, Da Vinci died due to a stroke in the Chapel of Saint-Hubert, Amboise, France. The king of the palace held Leonardo's head in his arms while he died. Later on, in the 18th century, many painters also portrayed this tragic moment with their paintings, which were sold worldwide.