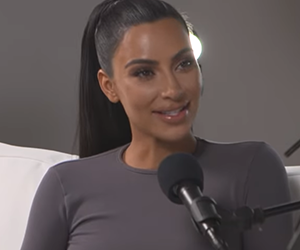 Kim Kardashian is one of the highest-paid TV actresses and she gets all the media attention because of her infamous sex tape which was released before the beginning of her reality show ‘Keeping up with Kardashians’. The reality show was a hit and because of that Kim soon became an icon. Along with her sisters, she also managed a series of retail and fashion businesses. Later, three of them launched various clothing lines. Additionally, she also launched her own range of perfumes and she has written a book namely ‘KardashianKonfidential’.

She was born in the year 1980 on 21st October in Beverly Hills, California. Her father's name was Robert Kardashian and her mother was Kris Houghton. They have four children and that means Kim has three siblings Kourtney, Khloe, and Rob. After the divorce of her parents, her mother married Bruce Jenner who was an athlete in 1991. She has twin half-sisters Kendall and Kylie. According to the report, her childhood was hardly the stuff of stardom. She is so wired for fame.

She went to the Roman Catholic, girl’s school and Marymount high school in Los Angeles. While she was attending the catholic girl’s high school, Kardashian worked for her father’s company and when his father died, the corporation was left to her and her sibling and they have sold it.

At the age of 19, she had a relationship with the music producer Damon Thomas but later in the year 2003, she filed a divorce case and she reported that the reason for this was emotional and physical abuse.

After that, she announced that she was pregnant with rapper Kanye West’s baby in the year 2012. In the next year, she gave birth to a daughter and in the same year, she became engaged to Kanye on her 33rd birthday. Kim Kardashian and Kanye West got married formally in the year 2014 in Florence, Italy.

She first came into the limelight for her friendship with the well-known socialite, Paris Hilton in the year 2003. After that, in 2007 she gained media attention after her sex tape with her ex-boyfriend was leaked. The name of her ex-boyfriend was Ray J. in the earlier of this year, vivid entertainment got this video. Vivid widely promoted the release of this video which is called Kim Kardashian superstar. But, when got to know about this, then she quickly countered with legal action and suing for invasion of privacy. But, later in the same year after the three months of the release, she agreed to a $5 million settlement. Thereafter, in the same year, she and her family members signed a reality television show ‘Keeping up with Kardashians’ and the show went well and became a huge success in her career.

She played the role of Lisa in the spoof film ‘Disaster Movie’ in the year 2008 and in the same year, she also announced that she would take the part of a famous dance reality show ‘Dancing with the Stars.’ In the next year, she appeared as a guest role in many popular shows such as ‘benefits’, ‘how I met your mother’. In 2009 she also endorsed shoedazzle shopping. In April 2009, she launched her DVD namely ‘Fit in your jeans by Friday’. This was basically a workout DVD featuring trainers, Jennifer Galardi and Patrick Goudeau.

After that, in august of 2009, she was appeared as a guest host of the wrestling show ‘WrestleMania XXIV’ and later in the same year, she appeared as a guest judge on the show ‘America’s next top model’. In December 2019, she launched her own perfume name ‘Kim Kardashian’ and in the same month, she was seen as a guest star on the popular TV show ‘CSI: NY’ in which she co-starred with Vanessa Minnillo.

She later became a part in the reality show ‘Kountry Kim take Miami’ and also appeared in the series ‘90210’. After this year, she started signing many endorsement deals and appeared in the film ‘Deep in the valley’ in the year 2010 and in the same year, she produced a TV reality show ‘the Spin Crowd’. She released another of her perfumes names ‘gold’ in the year 2011 and her wedding fragrance ‘Kim Kardashian love’. Later, this year a two-part series of her wedding preparations and her wedding was telecast.

Later, in the same year, she became a part of the reality show ‘Khloe Lamar’ appearing in three episodes. Later she was seen in 18 episodes of the reality show ‘Kourtney and Kim take New york’. She launched another fragrance in the year 2012 named ‘True reflection’ and in the same year, she played the role of ‘Nikki LePree’ in the TV series ‘Drop dead diva’. Along with this, she also appeared in some more TV shows such as ’30 Rock’ and ‘Punk’d’. She gave her voice in the adult animated series ‘American dad’ in the year 2013.

She appeared in the fashion magazine cover ‘Paper’ in 2014 and in the same year, she also released a mobile game for android and iPhone users called ‘Kim Kardashian: Hollywood’. She was appeared as the cover model for ‘Vogue Spain’ in the year 2015 and later she also released an emoji pack for iOS called kimoji. She played a cameo role in the film ‘Ocean’s 8’ in the year 2018.

Kim Kardashian is a well-known name in the film industry. Her show keeping up with Kardashians is one of the most famous shows in her career. Along with many controversies, she continued to do her own things.