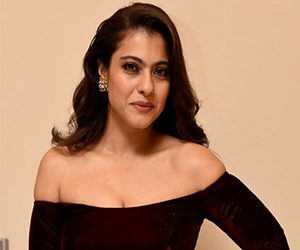 Kajal has been a successful Bollywood actress since the nineties. Being born into a film family, she grew up watching acting. She has acted in one of the best Bollywood movies. Her masterful performance has made her a beloved actress of millions. She has also received numerous awards and honors.

Kajal Mukherjee was born on August 5, 1974 in a famous Bengali and Marathi film family in Mumbai, Maharastra. Her father's name was Shomu Mukherjee, who was a film director and producer in the profession. Her mother Tanuja Mukherjee was a reputed actress. Her younger sister Tanisha Mukherjee is an actress in the profession. Kajal's maternal grandmother Shobhana Samarath and great grandmother Ratan Bai were associated with the Hindi film. Her uncle Jai Mukherjee, Deb Mukherjee and Ramu Mukherjee were also the filmmakers. Her cousin Sister is another famous Bollywood actress Rani Mukherjee and Shabrani Mukherjee. Her cousin brother Ayan Mukherjee is a film director.

She attended St. Joseph's Convent Boarding School. In addition to studying, she also learned to dance. But as she continued his studies, she set foot in acting at the age of sixteen, so she could not finish school life.

She came into acting life at the age of sixteen. In 1992, she made her debut with the movie 'Bekhudi', in which her own mother Tanuja also acted in thus film as her mother. Here Kajal played a character named Radhika. Although the film was not successful at the box office, Kajol's performance came to the notice of everyone. Then she starred in 'Bajigaar' opposite Shah Rukh Khan. Here her character's name was Priya Chopra. This film was a huge success. In 1994, she starred in 'Udhaar Ki Drama'. Here she played with Jitendra and Moushumi Chatterjee. Her outstanding performance in this film helped her win the Best Actress of the Year award. Then she got the lead role in the film 'Yeh Dillagi' of Yash Raj. Akshay Kumar and Saif Ali Khan starred opposite her in this film. This film also achieved special success.

In addition, in the same year, her other three film also released of 'Taquaat', 'Hulchul' and 'Gundaraaj', which were not successful. The following year, she and Saif Ali Khan acted in the film 'Bombay Ka Babu' which was unsuccessful at the box office. In 1997 she starred in her next film 'Gupt: The Hidden Truth'. Here she played the first villain and won the best villain title for this film. Her next film 'Isq' where she has also acted besides Ajay Devgn, Juhi Chawla and Amir Khan. This film achieved special success.

Her next film was 'Pyaar Kiya To Darnaa Kya', where her character's name was Muskan Thakur. This film also had special success. Her next film was directed by Tanuja Chandra and 'Dushmaan' written by Mahesh Bhat. It was a thriller film where she played the double role of the twin sister. She was awarded the Best Actress Screen Award for her performance in this film. She then starred opposite Ajay Devgan in the romantic film 'Pyar To Hona Hi Tha'. In the same year her 'Kuch Kuch Hota Hai' blockbuster achieved success. Shah Rukh Khan played the lead role opposite him here. She won the second Best Actress award for her performance in this movie. In 1999, she also starred in films such as 'Hum Aapke Dil Me Rehte Hain', 'Dil Kya Kare', 'Hote Hote Pyaar Ho Gaya' and 'Kuch Khatti Kuch Mitthi'.

Then came the success of her commercial film 'Kabhi Khusi Kabhi Gum'. The film is a blockbuster hit movie. Actors like Amitabh Bachchan, Jaya Bachchan, Shah Rukh Khan, Hrithik Roshan, Kareena Kapoor are acting alongside her in this film. In 2006 she starred opposite Aamir Khan in the film 'Fanaa'. Where she played the role of the blind and Amir Khan played the role of a militant. This film also had special success. After the success of this film she acted in Karan Johar's directed film 'My Name Is Khan'. Shah Rukh Khan played opposite her in this film. This film also had special success. She won the Best Actress title for the fifth time because of her great performance in this film. Then in 2015, Rohit Shetty starred opposite Shah Rukh Khan in the movie ‘Dilwale. Apart from the duo, Varun Dhawan and Kriti Sanon also acted in this film. The film was a huge success at the box office and became one of the highest grossing films. After this movie she performed in 'Helicopter Eela'. It is heard that her next film is a biopic, which she will acting with her husband Ajay Devgan.

Kajal didn't stop being an accomplished actress. In addition to her acting life, she has also done many social work. She has provided financial support for the widows and orphans of the society and has been with them on a regular basis. She was rewarded with ‘Karambeer’ for her work In 2008.