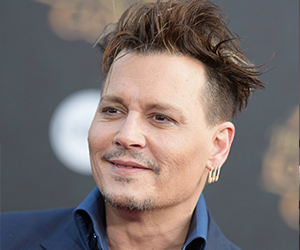 Johnny Depp is considered one of the most successful actors in terms of the box office. But, his life story is filled up with twists and turns. In his early life, he has an interest in signing but later he found his interest to perform on the big screen. He played different characters on the big screen and proved his talent again and again.

He was born in the year 1963 on 9th June in Kentucky. He was the youngest son of his parents. His father was John Christopher Depp and his mother was Betty sue palmer. His early interest was to learn about rock music. His father was a civil engineer and his early years were influenced by frequent moves. Then at the age of 12, he received a guitar from his mother and because of this, he got the interest to play in the local garage bands. When he was 15 years old, then his parents divorced.

He dropped out of school to fulfill his dream regarding rock music. He went to Los Angeles where he was a part of ‘Six Gun Method’ and later he signed as a part of the band ‘Rock city angles’. Her wide introduced him to a young actor by the name of Nicholas Cage and he encouraged him to pursue a career in acting.

He married Lori Anne Alison in 1983 and divorced in 1985. Then he dated the actress Vanessa Paradis for fourteen years. But, it ended in 2012. Then he married actress Amber Heard in February 2015 and ended in 2016. The name of his two kids is lily rose melody and jack john Christopher depp.

In 1984, he appeared in the film ‘a nightmare on Elm Street’ and in that film, he played the role of a boyfriend of the lead character, Nancy. After that, he earned a small role in Oliver stone’s ‘platoon’.

In the year 1987, he made his television debut in ’21 Jump Street’ and he played the role of Tom Hanson who was an undercover cop posing as a high school student. In the year 1990, he played in the movie ‘Cry baby’. However, it was not a big hit at the box office and later in the same year, he starred as the title character in ‘Edward Scissorhands’ and it was his first collaboration with director Tim Burton. After the success of the ‘Edward Scissorhands’, he played some more films such as ‘Benny and Joon’ and ‘what’s eating gilbert grape’ in the year 1993 and both of his considered as sleeper hits. But, later on, this year he displayed his diversity as an actor in the next film ‘Arizona dream’

The skilled actor was more focused on his performance rather than box office potential. This is why he teamed up burton to play the title role ‘Ed wood’. After that, in the year 1995, he showed his versatility by starring in ‘Don Juan Demarco’ and in that film he portrayed an eccentric man who trusts himself as a great lover. Along with this, ‘dead man’ a western filmed in black and white, and ‘nick of time’ a dark drama based on an accountant who has to knock off a politician to save his kidnapped daughter.

In 1997, he played in the movie ‘Donnie Brasco’ and he played the role of an FBI agent. In the next year, he paid homage to Hunter S. Thompson by playing the role of a writer in the film ‘Fear and loathing in Las Vegas’ and later in that same year, he played a short role in ‘LA without a map’. He appeared in the thriller film ‘The ninth gate’ with the 20th century and along with this, he also appeared in the sci-fi thriller ‘The Astronaut’s Wife’. In that film, he played with CharlizeTheron.

He appeared some more films in the year 2000 such as Chocolat and ‘before night falls’ and both of them were hit in the box office.In the following year, he appeared in ‘blow’, ‘the man who cried’ and ‘from hell’. The last one is based on ‘Jack the Ripper’ killings. After that, she starred in ‘once upon a time in Mexico’ in the year 2003 and in the same year he made his debut as captain jack sparrow in the film ‘Pirates of the Caribbean: the curse of the black pearl’. He also made a cameo appearance in the film ‘Happily ever after’ in the year 2004 and in the same year, he played J.M. Barrie in the film ‘finding neverland’ and he played the role of the creator of peter pan.

He and his sister put together a production company namely ‘Infinitum Nihil’ and the first film produced by the company was ‘the rum diary’. In the film ‘charlie and chocolate factory’, he played the role of Willy Wonka in the year 2005 and in the year, 2006 and 2007, he returned to his captain jack sparrow role in Pirates of the Caribbean. In 2010, he played the role Mad hatter in ‘Alice in wonderland’ and again in the next year, he played in the Pirates of Caribbean. In 2013, he played the cameo in Lucky them and in early 2015, he starred in Mortdecai.

He will be always known for his portrayal of eccentric characters in films like ‘Ed Wood’, ‘sleepy hollow’ and ‘charlie and the chocolate factory.’ Along with this, his role in Pirates of the Caribbean franchise will be remembered always.