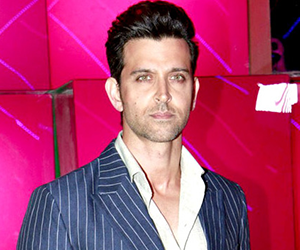 Hrithik Roshan is a famous Indian Bollywood actor. His extraordinary acting skills and dance ability have made him the idol of millions of people. His name is on the list of Forbes Indian best actors. He has also won multiple National Awards and Best Actor Award

Actor Hrithik Roshan was born on January 10, 1974 in a famous Punjabi family in Mumbai. His father Rakesh Roshan was a famous actor and film director. He was the son of music director Rasanlal Nagrath. His mother, Pinki Roshan, was the daughter of producer and director Jay Omprakash. He has also an elder sister named Sunyana Roshan. Hrittik Roshan’s nickname was Duggu.

He attended his school in the Scottish School of Bombay and graduated in Commerce from Sydenham College.

After a long twelve-year relationship, he married Sussane Khan on December 20, 2000. It should be noted that Sussane was a Muslim and a Hrittik was a Hindu. Their first child was born in 2006, named Rehan. Their second child was born in 2008, named Ridaan. But the relationship between Hrittik and Sussane did not last forever. On December 25, their divorce was finalized. The reason for this is that during the shooting of Krish-3, Hrittik is involved with his co-actress Kangana Ranaut, which resulted in the separation of Hrittik and Sussane.

Being the son of director Rakesh Roshan, he has no difficulty keeping his foot in Bollywood. Born in the filmy family, he was aware of it from an early age. In 2000, he made his debut in the Bollywood world with his first film ‘Kaho Na Pyar Hay'. His co-actress was Amisha Patel in the film. This film was a huge success. It was one of the most selling pictures of the year. Because of this movie, he won the Best Debut and Best Actor title that year. His next film was 'Fiza'. It was a crime based picture. Apart from this he has acted in Kareena Kapoor.

Fiza was a moderate success. After that he acted in 'Mission Kashmir', where his co-actress was Preity Zinta, co-starring Sanjay Dutt and Jackie Shroff. This film is also a huge success. In 2001, he and Kareena Kapoor starred in the film 'Yaadein'. He then worked as a co-star in the family-oriented film 'Kavi Khushi Kavi Gum' directed by Karan Johar. Kareena Kapoor was the heroine opposite him here. His co-stars were Shah Rukh Khan and Amitabh Bachchan. Co-actresses were Kajal Devgan and Jaya Bachchan. This film was a huge success and it was the highest grossing photo of the year. He was nominated for Best Actor Award for his performance in this film. The following year he reunited with his first film heroine, Amisha Patel, in the film 'Up mujhe aaghe lagne laghe' directed by Vikram Bhat. This film did not hit the box office but it was made a success.

Then he performed with Rani Mukherjee and Kareena Kapoor along with two But his acting success started with the 2003 film ‘Koi Mil Gaya'. The film is based on the story of how a supernatural power changed the life of a sick person. Preeta Jinta also acted in this film. The film was directed by Rakesh Roshan. The film was such a success that Hrittik won both Best Actor and Best Actor (Critic) titles that year for acting in this film. The next year, he teamed up with Preeta Jinta to star in 'Lakshya'. Amitabh Bachchan also played a special role here. After 'Lakshya', he acted in the movie 'May Aisa kiu hoon’ directed by Prabhudeva. This film also achieved special success.

In 2006, he was again seen opposite Priyanka Chopra in the sequel to ‘Koi Mil Gaya'. Here he also plays a scientist and super-hero in a double role. The film was such a success that it was the second highest grossing film of the year. In the same year, he and Aishwarya Rai starrer ‘Dhoom-2’ were released. In it he played the role of a brilliant thief. Uday Chopra, Abhishek Bachchan and Bipasha Basu starred with him in this film. He won the Best Actor Award for his performance in this film.

In 2008, he was seen in the film 'Jodha Akbar', again in association with Aishwarya Rai. In this film, he played Mughal emperor Akbar's character. He received his fourth best actor award for his performance in this film. In 2009 he starred in Zoya Akhtar's film 'Luck Bychance'. This film did not achieve success that way. The following year, she starred opposite a foreign heroine in the film 'Kites'. The film was a record breaking success. The same year he and Aishwarya Rai starrer 'Gujarish' were released. In this film he is seen as a quadriplegia patient. He won the Best Actor (Critique) award for this film. In 2011, he again appeared in the comedy-centric film 'Zindegi na Milegi Dobara' directed by Zoya Akhtar. In this film he was also accompanied by Katrina Kaif, Farhan Akhtar, Abhay Deol and Kalki.

In 2012, he starred in 'Agneepath' directed by Karan Malhotra. This film also achieved great success. Priyanka Chopra, along with Sanjay Dutt starred here. In 2013, he was seen in the sequel to 'Krish' in the film 'Krish-3'. Priyanka Chopra, Kangana Ranaut and Vivek Aberaya were also present here. The movie was one of the best-selling films in India. Similarly, in 2014, he and Katrina Kaif starred in the film 'Bang Bang'. Then in 2016, he was seen in the historical epic 'Mohenjodaro'. But the film was not as successful as expected.

Then he and Yami Gautam starred in the film 'Kabil'. Here he plays the role of a blind man. This film also achieved special success. So far one of his biographical pictures is 'Super Thirty'. This film is based on the biography of the famous mathematician Anand Kumar. It was released in 2019. His next action-centric film is 'War'. Tiger Shroff is sharing the screen with him here. The film was released on October 2nd.