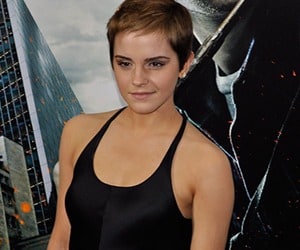 Emma Watson is a model and an English actress who kick-started her career after her journey with the very popular Harry Potter series. She is also actively participating in the events conducted by the British social activist association. Born in Paris, France, Emma shifted to Oxfordshire at the age of just five years.

In the year 2017, Emma also started her own live-action Disney fantasy series "Beauty and the Beast", which also received a lot of appraisals and attention. Her interest in acting has been popping up from a very young age, though she managed to complete her studies, along with her acting interest successfully. She used to work on the film projects parallelly along with her education.

Watson has always supported education rights for the girl students, where she started her campaigns by visiting countries like Bangladesh and Zambia. In the month of July 2014, the UN appointed her as the UN Women Goodwill ambassador.

Born in Paris, France, Emma was the daughter of Jacqueline Luesby and Chris Watson, who were both English Lawyers. Until the age of five, she spent her life in Maisons-Laffitte near Paris. According to Emma, she had good knowledge of the French language as well and speaks it, though not that good as once she used to. Due to some issues and conflicts, her parents decided to divorce each other when Emma was just at the age of five years. Watson moved to England with her mother and stayed near Oxfordshire, and used to go and meet her father in the weekends in London. After shifting to Oxford with her mother and brother, she started going to the Dragon School in Oxford, where she studied until the year 2003.

Her passion for pursuing the acting career has been sparking enough from the age of just six years. And to move a step forward and take her passion ahead, she used to train at the Oxford branch of Stagecoach Theatre Arts, which is a part-time theatre school. She used to practice and study singing, dancing and acting there.

Just within ten years of age, Emma became the part of many acting and dramas, where she performed in various Stagecoach productions and mini school plays. This also included one of her famous acts in the play " Arthur: The Young Years and The Happy Prince." But this was just an amateur school play and also a better exposure for proceeding with her career. Later she worked professionally for the first time when she played the role of Hermoine the Harry Potter series. Right after her initial days in the Dragon School, Emma passed on to Headington School, Oxford. While on film sets, she and her friends were tutored for up to five hours every day. In the month of June 2006, she appeared for GCSE school examinations in ten subjects, getting eight A* and two A grades. In the month of May 2007, she also appeared for the AS levels in Art, English, Geography, and History of Art. Right next year, she made a decision and dropped History of Art to continue the three A levels, getting an A grade in each subject.

Commencement of the Career:

In the year 1999, shooting began for Harry Potter and the Philosopher's Stone (a movie that was released as Harry Potter and the Sorcerer's Stone in the United States). It was one of the film version of British author J. K. Rowling's best-selling novel. The Cast crew agents reached to Watson through her Oxford theatre teacher, and producers were overwhelmed by her determination. After taking about eight auditions, the producer told Watson and other two candidates, Daniel Radcliffe and Rupert Grint, that they had been finalized for the roles as the schoolfriends. And they were assigned the lead roles of Hermione Granger, Harry Potter and Ron Weasley, respectively. JK Rowling also found some kind of speciality and always backed Emma from the beginning of the Cast.

In the year 2004, Harry Potter and the Prisoner of Azkaban arrived onto the big screens. Watson was aware of the more outspoken role of Hermione, which she played. She also appreciated her character calling it "charismatic" and totally "a fantastic role to play". Some critics panned Radcliffe's performance, specifying him as "wooden", but they never got tired of praising Emma. The New York Times complimented her act too. Harry was the actual one to show off his serene and appreciable wizardly skills. Hermione also received some of the loudest cheers.

In the month of May 2010, Emma was announced to be in talks to feature in a film adaptation of "The Perks of Being a Wallflower." The show filming started in the summer of the year 2011, which was released in the month of September 2012.

Emma has also played a preeminent role in promoting education for girls while visiting countries like Bangladesh and Zambia. For her active participation as a social rights activist, in the month of July 2014, she was selected as a UN Women Goodwill ambassador. In the same year, in the month of September, In the state of a lot of nervousness, she delivered addressing at United Nations Headquarters in New York City to launch the UN Women campaign HeForShe. The campaign mainly aims and asks for men to promote gender equality.

In the same speech which she delivered in the UN, she started to question all of the gender-based assumptions at the age of eight years when she was called "bossy" (which was just a reflection of her being a "perfectionist") while the other boys were not, and she also mentioned about sexualization by the media that happened to her at the age of 14 years.