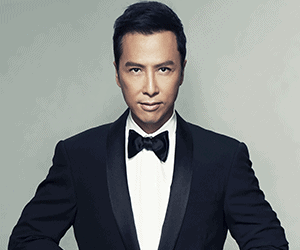 Donnie Yen is an all-rounder performer in the Movies and entertainment industry. Based in Hong Kong, he is an actor, action choreographer, martial artist, stunt man, film director, and also a wushu master.

The movie "Drunken Tai Chi" opened his doors in the entertainment industry. The film was released in the year 1984. Right after this, his next movie was Tiger cage that was released in the year 1988. Yen can be said to be a mixed martial artist. He started his martial art journey by learning Tai Chi at a very very young age under her mom's tutelage. Later he pursued other martial arts like Taekwando in his teenage years.

Many times he has been invited by several Hollywood directors and producers to create the plot of action choreography in movies such as "Endgame", "Highlander," "Shanghai nights," etc. Though Yen has been adopting many strict routines, diets, and exercises to maintain his muscular build for various dynamically required movies, he is also very much appraised for his genuine acting, which touches almost everyone.

Yen is recognized by many for producing and providing to the popularisation of Wing Chun in China. He acted as Wing Chun grandmaster in the 2008 movie Ip Man, which became a box office success. This event and the movie also led to the escalation in the number of audiences taking up Wing Chun, leading to numerous new Wing Chun schools which were started up in mainland China and several other regions of Asia. Ip Chun, who was the eldest son of Ip Man, even said that he is grateful to Yen for creating a sensation and popularizing his family's art and allowing his father's legacy to be recognized in the longer runs. Further, he also received international recognition for acting as Chirrut Îmwe in Rogue One: A Star Wars Story that was released in the year 2016 and Xiang in xXx: Return of Xander Cage that was released in the year 2017.

Yen is also one of Hong Kong's top action movie stars. Yen has showcased skill in an array of martial arts, being extremely good in Tai Chi, Taekwondo, Karate, Boxing, Kickboxing, Jeet Kune Do, Hapkido, Muay Thai, Wrestling, Brazilian Jiu-Jitsu, Judo, Wing Chun, and Wushu. As one of the most famous film stars of Asia during the years of the early 2000s, Yen has also consistently maintained himself in one of the highest-paid actors and performers in entire Asia. Yen made about 220 million Hong Kong Dollars that is equivalent to 28.4 million US Dollars. And he did all this just from the four films and only the six advertisements in the year 2013.

During the time of early childhood, when he was just at the age of two years, his family shifted to Hong Kong and sooner after some time, they moved to the United States, settling in the Boston region when he was eleven years old. Donnie Yen was born in the city of Guangzhou in China. His mother, Bow-sim Mark, is a Fu Style Wudangquan, which translates to an internal martial arts trainer in English. Not just this, she is also a Tai Chi grandmaster. On the other hand, his father is a newspaper editor and the journal publisher. He also has a younger sister, whose name is Chris Yen, and she is also a martial artist and actress and was featured in the film Adventures of Johnny Tao: Rock Around the Dragon, which was released in the year 2007.

Yen was also the part of a family that had music flowing in their veins. In addition to being a martial arts teacher in Boston, his mother is also a soprano, while his father knows how to play the violin. From a very young age, he was always convinced and trained by his parents to play musical instruments, that also included the piano. Likewise, he is very good at hip-hop dancing and knows breakdancing as well.

At a very young age, his mother has a strong influence of martial arts on him, which made him indulge in it so seriously that at the age of fourteen, he dropped his school to learn martial arts. His parents were worried when he was consuming too much time in Boston's Combat Zone. After getting so much worried, they finally made a decision and decided to send him to Beijing for a two-year training program with the Beijing Wushu Team.

When Yen was about to return to the United States, he came via Hong Kong, where he just made a casual visit and where he also met action choreographer Yuen Woo-ping. During the age of about sixteen years, Yen finally decided to pursue Taekwando.

Yen choreographed lots of the fight animation in the video game ‘Onimusha 3’ that was launched in the year 2004. This game featured actors Takeshi Kaneshiro and Jean Reno. Yen also served as action choreographer in Stormbreaker, starring Alex Pettyfer.

Yen remained to be active in Hong Kong cinema in the early of the year 2000, featuring as Chu Zhaonan in Tsui Hark's wuxia epic film Seven Swords, and also starred as Ma Kwun in Wilson Yip's harsh crime drama film SPL: Sha Po Lang that was released in the year 2005.

Both films were shown up at the 2005 Toronto International Film Festival. Later in the same year, Yen co-starred with Nicholas Tse and Shawn Yue in Wilson Yip's Dragon Tiger Gate, which was an adaptation of Wong Yuk-long's manhua series Oriental Heroes. Yen proceeded to go with Wilson Yip in Flash Point, in which he featured as the leading role and also served as producer and action choreographer for the film. Later, for this, he also received the award for Best Action Choreography at the Golden Horse Film Awards and the Hong Kong Film Awards for his performance and work in Flash Point.

In 2011, Yen reported that he was attempting into other genres of movies and had taken up two comedy characters, in All's Well, Ends Well 2011 and All's Well, Ends Well 2012, and would be acting with Carina Lau in the former and Sandra Ng in the latter. Both films achieved substantial critical and box-office success and also showed Yen's versatility as an actor.

Yen took a long six-month rest in the second half of 2011 after the filming of The Monkey King 3D, saying that he wanted to stay for more time with his family and be with his children more often during their early childhood days.