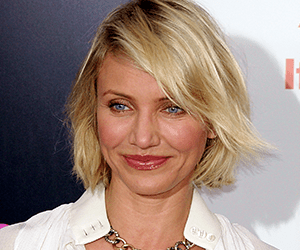 Cameron Diaz is a former model who is famous for her comedic roles and girl-next-door attitude. She made her debut with the big-budget mega-hit ‘The Mask’. The movie was a big hit in the box office and after that; she went on to appear in the several box office hits including ‘My best friend’s wedding’. With her excellent performance, this actress has established herself as one the A-listers in Hollywood. She has been also voted the best looking female star by many famous magazines.

Cameron Diaz was born in 1972 on 30th August in San Diego, California. Her father's name was Emilio Luis Diaz and her mother was Billie Joann. Her father was a field gauger at an oil company and her mother used to work as an import-export agent in San Diego. She has an elder sister and she grew up in the city of the long beach which is situated in Southern California.

She studied at the long Beach polytechnic high school. At the age of 16, she began her modeling career and very soon after that she signed a contract with ‘’Elite Model Management’ and worked as a model for Calvin Klein and Levi’s. After that, in the year 1990 at the age of 17, she was featured in the front cover of the teenage magazine ‘Seventeen’.

She was in a live-in relation to the video producer Carlos De La Torre from 1990 to 1994. She has been romantically involved with actor Vincent D’onofrio, actor Matt Dillion, Jared Leto and courted Justin Timberlake for 3 years. After that, in 2010 she dated New York baseball player Alex Rodriguez but they broke up in 2011. She started dating Good Charlotte’s Benji Madden in May 2014 and later in this year she was engaged to the rocker. She was also involved with the Iraq and Afghanistan Veterans of America. It is one of the largest non-profit associations for veterans of the wars in Iraq and Afghanistan.

When she was 19 years old, then for the first time she starred in the 30-minute soft adult movie titled ‘She’s No Angel’, before she made her debut in Hollywood. After that, she appeared in the hit superhero fantasy film ‘The Mask’ in the year 1994 along with Jim Carrey and because of this film she earned the Golden Globe nomination. After that, in the next year, she was starred in the ‘The Last Supper’ which is directed by Stacy Title. The film was about five graduates who planned a murder. She played the role of ‘Heather Davis’ in ‘She’s the one’ in the year 1996. It is a comedy-drama film directed by Edward Burns. In the same year, she also appeared in the film ‘Feeling Minnesota’

She delivered an award-winning performance in the romantic movie ‘My best friend’s wedding’ in the year 1997 with Julia Roberts, Dermot Mulroney, Rupert Everett, and Philip Bosco. She also appeared in ‘A life less ordinary’, in the same year. In 1998, she appeared in the movies ‘Fear and loathing in Las Vegas’, ‘Very Bad things’ and the award-winning films ‘There’s something about Mary’. She was seen in the golden globe nominated film ‘Being John Malkovich’ in the year 1999 and after that; she was also seen in ‘things you can tell just by looking at her’ and ‘the invisible circus’.

She played the role of ‘Natalie cook’ in the action comedy film ‘charlie’s angels’ in the year 2000 along with Drew Barrymore and Lucy Liu. She gave her voice in the animated fantasy film ‘shark’ to the character ‘Princess Fiona’ in the year 2001. In the same year, she was seen in the award-winning film ‘Vanilla sky’. After that, in the next year, she acted in the film ‘the sweetest thing’ and she earned a golden globe nomination for the role she played in this movie ‘Gangs of New York’. She reprised her role as ‘Natalie cook’ in the sequel of Charlie’s angels, ‘Charlie’s Angels: Full Throttle’ in the year 2003. After that, in 2005 she appeared in the film ‘In her shoes’. In this film, she played the character of ‘Maggie Feller’s’ and her emotional journey through relationships, love, sisterhood, and womanhood.

She was seen in one of her most popular flicks ‘what happens in vegas’ in 2008. This is basically a romantic comedy film starring Ashton Kutcher. She starred in the film ‘my sister’s keeper’ in the year 2008 and the movie is based on Jodi Picoult's novel of the same name. In the year of 2011, she appeared in various movies like ‘The Green hornet’ and ‘Bad Teacher’ and in the next year she was seen in the films like ‘what do expect when you are expecting’, ‘A liar’s autobiography’, ‘Gambit’, and ‘the counselor’. The film ‘The other woman’ released in the year of 2014.

Cameron Diaz is one of the fortunate actresses to get a chance to debut in a film like The Mask. After doing this film, she doesn’t get the time to think anything else because she started getting opportunities to do more films. Her career graph will speak the same thing because in each and every year she appeared in good films and critics praised her for her performance. Her movie ‘My best friend’s wedding’ is a global box office hit and the movie was one of the biggest films of 1997. Along with this, ‘there is something about mary’ is also the highest-grossing film of 1998.