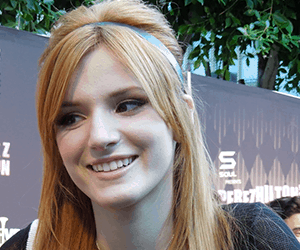 Bella Thorne is an American actress and singer and her real name is Annabella Avery Thorne. When she was a child, then she introduced into this world as a child model. For her performance, she received many young artists’ awards and then she appeared in several films such as Midnight sun, you get me and so on. She also secured the lead roles in television series such as My Own Worst Enemy, little monk and so on.

In her earlier days, she was diagnosed with dyslexia but with her continuous writing and reading practice, she was able to overcome this problem. She was born on 8th October 1997 at Pembroke Pines in Florida, United States. Her father was Reinaldo Thorne and her mother was Tamara Thorne but her father died in the year 2007 due to a motorcycle accident. Her mother is a bestselling American horror writer and she has three elder siblings and all of them are actors. She is an ambassador for Neutrogena products.

Thorne’s first language was Spanish. However, she dropped it when she started attending school.

After the death of her father, she started working as a junior artist. Thorne was bullied a lot in her school because of her dyslexia. Then, she was home-schooled and to overcome the problem she attended in Sylvan Learning center.

Bella Thorne declared in the year 2016 that she is a bisexual. Then, she was in a relationship with the famous internet persona TanaMongeau. They started dating each other in 2017. Previously she was in a relationship with the renowned rapper Lil peep. He died on 15 November 2017 due to the overdose of Fentanyl-Xanax. She also linked with Jake Austin, Kenton duty, Garrett Backstrom, Cody Simpson, Charlie puth, Gregg sulkin, and Scott Disick. She involved herself in various foundations to raise awareness regarding dyslexia. She is a philanthropist. There are many foundations with which she is attached such as cystoc Fibrosis foundation and the nomad organization. Both of them are providing educations food and medical expenses to the children in Africa. She is a pet lover and she has 2 dogs, six cats, and a turtle.

She started her career as a child model and she has appeared in several roles in films. When she was only 6 years old, then she appeared as a sidelines fan in the file stuck on you. since 2013, she started doing small roles in films and television projects.

After doing this for a few years, she received a major television role in the year 2007 in the second season of Dirty Sexy Money. She joined the other cast and her name was Margaux Darling.

Then in 2008, she started playing the role of Ruthy Spivey in the drama series My own worst enemy and later she was awarded for this role. She also secured lead roles in the Disney Channel sitcom shake it up and from then, she started rising as a good actor. In that series, she was playing with Thorne and Zendaya and she played the role of a dancer. Along with this, she also appeared in various television series such as October road little monk, Mental, big love, good luck Charlie, in motherhood and so on.

In 2017, she got her first lead role in the television series Famous in love and she was playing the role of Paige Townsen. She got another big break to play in shake it up where she played the role of the popular CeCe Jones on the Disney channel. Her acting was undoubtedly impressive.

She has also voiced in underdogs, the frog kingdom, and the snow queen 2, the snow king and ratchet clank. Some of the movies where she appeared are blind ambition, the seer, forget me not, one wish, raspberry magic, blended, mostly ghostly, big sky, keep watching, Amityville, the babysitter, midnight sun, ride, Conrad Michelle and I still see you.

Bella Thorne launched her first singing album ‘Made in Japan’ in the year 2012 followed by a single ‘TTYLXOX’ and another album and a single ‘Jersey’ and ‘call it whatever’. Then, in the year 2015 she launched her teenager novel and then again in the next year she launched another one. She was suffering from dyslexia in her earlier days and because of that, she faced many problems. Now, she speaks out against bullying and it is very inspiring for the people who are suffering from this.

Along with this, Thorne also supports the welfare campaigns and she is also involved in many philanthropic activities and with many charitable organizations such as Dosomething. org, Friends of El Faro and so on. She also sponsors a child whose name is Lydia kaiinikiio in kibwezi, Kenya. She is also trying to spread knowledge and awareness about dyslexia. She also played roles in HBO’s big love and wizards of Waverly place.

Bella Thorne is one of the popular young American actress and singer. She had dyslexia and because of that, she was bullied in her school and then she struggled to get her position where she is now. She is a talented actress and not only acting, but she is also exploring the field of singing, writing and so on. She once told in her interview that she proved all of them wrong who told her that she couldn’t be an actress. She also accepts the fact that acting helped her to overcome the challenge. She is associated with many social works from where she can build awareness regarding dyslexia.