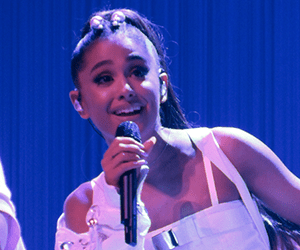 Born in: Florida, US

Ariana Grande is a famous American singer and actress who is a sitcom-star-turned –pop music sensation and known for her hit songs like ‘Problem’, ’Bang-bang’, and ‘Thank U, Next’ and so on. Since her earlier age, she participated in plays and sang at public events. That time she realized that she wants to do this for her whole life. Her debut album ‘Yours truly’ broke many records and ruled over the ‘billboard top 100’ chart for a few weeks. Several hundred thousand copies were sold of this album and Ariana Grande becomes a huge star after this.

Ariana Grande was born in Boca Raton in Florida on 26th June 1993. Her father Edward Butera was a graphic designer and her mother Joan Grande was a businesswoman. Her family had relocated to Florida from New York when her mother Joan was pregnant with her. She has an interest in acting and she made her way onto the local theatre scene before she was a teenager. She was worked in two plays namely ‘Beauty and the Beast’ and ‘The Wizard of Oz’. She was also seen in the national television singing ‘The Star-Spangled Banner’ at a young age.

She followed her dreams and fulfill her dreams she traveled to Los Angeles at the age of 13 and she wanted to record an R B album. However, since she was too young this is why the managers of the record labels didn’t take her in a serious way. She also gets the opportunity of a supporting role in the musical 13 which was staged in the famous Broadway theatre.

At Pine Crest School and North Broward Preparatory school, she pursued her primary education. Due to her role of musical ‘13’, she discontinued her studies for a long time.

She went public about the relationship with Mac Miller in the year 2016 but they split in May 2018 after dating him for two years. Then, in the year 2018, People magazine confirmed that she was engaged with SNL’s Davidson. The pair split in October 2018. She was also seeing musician Big Sean who collaborated with her on several musical ventures. Additionally, she is the half-sister of renowned actor Frankie Grande.

In 2009, she was chosen to play the role of Cat Valentine in the sitcom ‘Victorious’ and this was her big break to enter into this industry. It was aired by ‘Nickelodeon.’ Famous actress Elizabeth Gillies was also a part of this show. In the next year, she was seen in the musical Cuba Libre which is produced by the well-known American musician Desmond child.

After that, in the year 2010, she decided to take a break from her acting projects and decided to focus on her singing skills. One year later, her song ‘give it up’ from the soundtrack of ‘victorious’ was released. She was able to get the attention of Monte Lipman who is a top executive of the label ‘Republic Records’.

Hence, she was signed with a contract with the record label and in the year 2011 her first single ‘put your heats up’ was released. She was also dubbed for the character Princess Diaspro and she was also the voice of the lead character from ‘Snowflake, the White Gorilla’. It was an animated film that was dubbed in English.

‘Victorious 2.0’ and ‘Victorious 3.0’ were released in 2012 and where she lent her voice in two songs. These tracks were ‘don’t you’ and ‘L. A Boyz’. After that, she played snow-white in the theatrical adaption of ‘A snow-white Christmas’. Popular and renowned actors like Neil Patrick Harris and Charlene Tilton were also a part of this performance. Then in the year of 2013-2014, Ariana was chosen to play in the popular sitcom ‘Sam Cat’ in the character of Sam Puckett.

In the year of 2013, she also released her debut album ‘Yours truly’ in august and within a month the album secured the topmost spot in the US ‘billboard 200’ countdown. Especially, the track ‘the way’ from this album received a lot of acclaims and it was in the 10th spot on the billboard hot 100 for a few months. In the same year, her EP ‘Christmas kisses’ released and her television film ‘Swindle’ was also aired on the same time on ‘Nickelodeon’.

In the mid of 2014, she released her second album ‘My Everything’ and it received critical and commercial success. Within the fast week a huge amount of copies of the album sold and this is why the album bagged a top spot in the Billboard 200. ‘Problem’ and ‘Break free’ these are the two singles from this album which were bug hits with music lovers. They secured no 3 and no 4 positions on the Billboard Hot 100. Along with this, the track ‘Problem’ also featured renowned Australian rapper Laggy Azalea.

In 2104, she also sang the track ‘Bang Bang’ from English singer Jessie J’s album ‘sweet talker’. After that she returned in acting in 2015 through the comedy-horror series namely ‘scream queens’ and in the same year, she released her third album, Dangerous Woman. For this album, she was critically and commercially acclaimed album dangerous woman. The title track of this album and the single ‘Be alright’ from this album was a hit and went on to become chartbusters.

There is no doubt that ‘Yours Truly’ was one of the best works of Ariana Grande and brought her into the limelight. More than 500,000 copies of this album sold. The album also helped her to receive the reputation of being 15th female artiste of all time to rule the music charts.

The famous American singer and actress started her journey at her earlier age and by her singing and acting style, she became one of the most popular youngsters in recent times. Her popularity has been flooded by a strong social media presence on Instagram, Twitter, and Facebook.