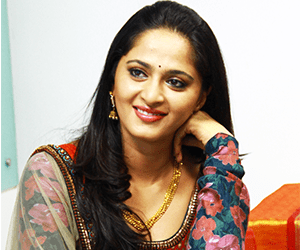 Anushka Shetty is an Indian role model and actress commonly seen in various Telugu and Tamil movies. Her real name is Sweety Shetty. She is also one of the highest-paid Indian actresses and very popular in South Cinemas. She is also referred to as lady superstar of South cinemas. She has been popularized due to her two prominent roles in

the movies Bahubali and Bahubali 2. She started her career in early 2005 where she worked in the Telugu movie "Super". She was also nominated for the best-supporting actress-Telugu award for this movie. Her future films after this, hit success one by one. She played as a prostitute in the movie Vedam that got her two consecutive best actress from FilmFare and CineMaa. Before her career in film industry Anushka also worked as a Yoga teacher. In the movie, size zero she gained about 20 kg of weight to play the role of an obese lady. In 2015, she was voted as most desirable women in Hydrabad Times.

Anushka comes from ‘Bellipady Uramalu Guthu’ family. She had two brothers: Gunaranjan and Sai Ramesh. Sai Ramesh is a cosmetic surgeon. She completed her schooling in Bangalore followed by bachelors of Computer Applications from College Mount Carmel, Bangalore. Bharat Thakur taught her Yoga after which she served as a yoga instructor for some years as well.

Her first movie Super featured two girls Anushka and Ayesha, who are depicted as sexy girls showing off their bodies. In the corresponding year, she was also part of the movie Maha Nandi.

In the year 2004, she became part of four more movies. Her first movie "Vikramarkudu" became a grand success which gave her a lot of national recognition among the eyes of various filmmakers.

Though at the initial phase, not all her movies were a success in the box office, the actress got the recognition and attention she deserved. Later on, she started doing, even more, appearing in the eyes of many directors with more screen time roles as well.

In 2009, Anushka initially starred in the blockbuster, the fiction film ‘Arundhati’. In this heroine-centric film, she portrayed for the two roles in her entire career for the very first time. It was significant, as well as financial success. Reviewers piled praise on Anushka for her show and execution. ‘Idlebrain's Jeevi was totally impressed by her double role said that "exceptionally well with subtle yet impact creating performance". Some also declared her performance as brilliant and breathtaking labelling ‘Arundhati’ as "totally Anushka's film". She also received the Nandi Special Jury Award and the Filmfare Best Actress Award for this movie.

Her next film Billa was just a remake of the 2007 Tamil cinema with the same title. The film gained mixed reviews, with Anushka's physique and her role compatibility. Her closing release in 2009 was her another Tamil feature film, ‘Vettaikkaran’ with actor Vijay and it underwent unfavourable reviews. Critics said that the role of Anushka should have been a bit denser and it felt like it was just a touch Anushka movie.

She had a series of releases in 2010. She represented a prostitute in Krish's critically acclaimed compilation film ‘Vedam’ which features and stars Allu Arjun. For her show, she won the Filmfare Award for the Best Actress, which was her second consecutive Filmfare Award. Her subsequent Telugu film, ‘Panchakshari’, was added heroine-centric film where she again played double roles. After this, she worked in the action-comedy Khaleja, where she featured opposite Mahesh Babu for the first time in her entire career. ‘Nagavalli’, which was the Telugu remake of the Kannada film ‘Aptharakshaka’, where she portrayed the prominent role of Chandramukhi and Ragada. She also executed exceptional characters in the movies ‘Kedi’ and ‘Thakita Thakita’. However, all these 2010 did not make a significant impact on the box office. Her Tamil version of Singham 2010, co-starring Suriya was a substantial commercial success. ‘Sify’ declared, "Anushka is there only for glamour and songs, but does a decent job". while Pavithra Srinivasan of ‘Rediff’ added, "Anushka, thankfully, has more to do than prance around in skimpy clothes (which she does very well). She romances dutifully, but her part picks up when both she and Suriya are in Chennai, tangling with villains."

2011: She reprised her role she in ‘Vedam’ in its Tamil remake, ‘Vaanam’ (2011), which was also critically acclaimed. The actor's eyes effectively carry happiness, helplessness, pain and anger. She seems to be exceptional as the commercial sex worker as she can bring out a life-like performance. She featured next in ‘Deiva Thirumagal’. The film became a significant success, bringing her laurels for her portrayal as Anuradha, an advocate. Her character in the movie had a proper reach for production without the need to be charming. She won her first Filmfare nomination in the Tamil category, along with the Vijay Award for Favourite Heroine.

2012: Anushka collaborated with A. L. Vijay and Vikram in the action drama movie ‘Thaandavam’. 2013: After the failure of Alex Pandian, her second release was ‘Mirchi’. She seemed to be adorable in a naughty village, belle. She looks pretty and livens up the moments. He next movie was ‘Singam II’, in continuation to ‘Singam’ (2010), reprising her role from the first movie.

Moreover, she did some more decent movies in the upcoming years like ‘Irandam Ulagam’, ‘Linga’ where she played with Rajnikanth, Yennai Arindhaal, Bahubali etc. which even helped her raise her overall acting career to another level.