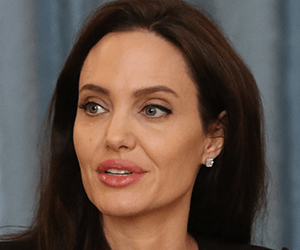 Angelina Jolie is one of the famous award-winning leading Hollywood's actresses and she is also known for her outstanding performance in ‘Salt’, ‘Girl interrupted’ and ‘Maleficent’. She also devoted her time and attention to humanitarian efforts. She has become the best-known celebrities in the world today. She also gets media attention for her high profile relationship with Brad pit. She is one of the most beautiful women and this is why she also received media attention from many magazines such as ‘Vogue’, ‘Vanity fair’ and ‘Hello’

Angelina Jolie was born on June 4, 1975, in Los Angeles, California and the name of Her father Jon Voight and her mother was Marcheline Bertrand. Her parents were working in this profession. She spent most of the time of her childhood in New York before relocating to Los Angeles at the age of 11.

She attended the Beverly Hills high school and lived on her mother’s modest income because her relationship with her father was extremely troubled. She enrolled at the Lee Strasberg theatre institute for acting courses. After the training for two years, she started appearing in various stage productions. She later studied drama at New York University. While she started doing acting in theatre production, then she modeled and appeared in some music videos.

The actress was also famous for her off-screen romance. She was married three times. In the year 1995, she married Hackers co-star Jonny Lee Miller and they divorced in the year 1999. In the following year, she married Academy Award-winning actor Billy Bob Thornton and they separated in the year 2003. After that, she met Pitt during the time of making Mr. and Mrs. Smith in 2004 and they become of the most favorite Hollywood couple. In 2002, she adopted a son from Cambodia and she named him Maddox. After that, she adopted a daughter in the year 2005 and she named her Zahara. Pitt did all the paperwork to adopt Jolie’s Children and the couple gave birth to their first biological daughter in 2006 and they named her Shiloh.

After that, Jolie adopted a 3-year-old boy in the year 2007 and named him PaxThien. In the year 2008, she gave birth of twins namely Knox Leon and Vivienne Marcheline. Pitt and Jolie became engaged in the year 2012 and they quietly tied the knot in a private marriage ceremony surrounded by their close friends and family member on 23rd august, 2014 in France. However, the couple filed for divorce in the year 2016 and the next year during the time of giving an interview in ‘Vanity Fair’, Joile said that things became difficult but she defended their life together.

Angelina Jolie was seen in the movie ‘Looking to Get out’ in the year 1982 and this movie co-written by her father. She was only 7 years old when the movie released. After that, in 1993 she appeared in the film ‘Cyborg 2’ as Casella ‘Cash’ Resse and played the role of a near human-robot. The film did not go well. She starred in the film ‘Hackers’ in the year 1995 and that won her a lot of appreciation. In the next two years, she played the part of a stripper in ‘Anybody Seen My Baby’, a music video by the Rolling stones.

After that, in 1998 she appeared in the HBO blockbuster biographical series, ‘Gia’ which was based on the life of a supermodel GiaCarangi. A string of successes followed and she gained international acclaim with the 2001 film, ‘Lara Croft: Tomb Timber’ in which she proved her and made her a famous name in Hollywood. After that, in the year 2004 she played the role of an FBI profiler in the film ‘Taking Lives’ and along with this, she also appeared in a few films such as ‘Mr. and Mrs. Smith’ and a disturbed wife in ‘The Good Shepherd’. She made her directorial debut in the year of 2007 with the documentary film ‘A Place in Time’

She also played the role of Mariane Pearl in the film ‘A mighty heart’ which is a documentary drama film and based on the true story of Daniel Pearl’s assassination. She appeared in the action movie ‘Wanted’ in 2008 and for this movie she earned great critical acclaim. In the next year, she played the lead role in the film ‘Salt’ and the movie released in 2010. With Jonny Deep, she was also seen in the movie Tourist in the year 2011. She wrote a love story set during the Bosnian War and directed the film in 2011 namely ‘In the land of blood and honey’. In the year 2014, she did the blockbuster film and she was the executive producer of Disney’s Maleficent. The sequel of this film released in October 2019.

Angelina Jolie is one of the most famous names in worldwide. She was famous for her acting, her beauty and all. Her personal life was always under the limelight. But, she was made a goodwill ambassador for the UN refugee agency in 2001. She also made headlines for her work in Cambodia and for this, she also received an award. But, she has continued to draw attention to global issues. She had her ovaries and fallopian tubes removed to reduce the risk of cancer. In an interview, she said that the most important thing is to learn about the options and choose what is right for you personally.