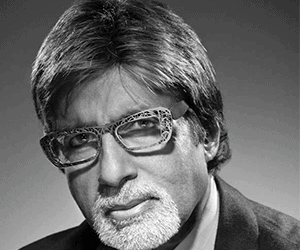 Amitabh Bachchan was a successful and popular actor of the seventies. Due to his acting prowess, he made it to Bollywood very easily. He is the favorite actor of many people. His stardom has earned him the reputation of being 'Big B', ‘Angry Young Man’ and so on. He has also been honored with many honors due to his acting skills. His contribution to Bollywood is unique.

He initially studied at Sherwood College in Nainital, later studying at Kiriri Mall College, Delhi University. It is heard that his mother is most interested in him for his acting career. After completing his studies, he set his foot in acting life.

He first started acting in 1969. He acted as a sound director in Mrinal Sen's international award winning film  'Bhuban Som'. He then starred in a film called 'Sat Hindusthani' directed by Khwaja Ahmed Abbas. In this film he  plays the lead character. Then in 1971 he was seen playing the role of a doctor in the film 'Anand'. Rajesh Khanna was the lead actor in this film. Amitabh Bachchan won the title of best actor of the year by acting in this film.

In the same year, he acted as the lead actor in the film 'Parbana'. After Parbana, he first worked with Jaya Bhaduri in a movie called 'Gooddy'. In 1972 he worked on his comedy film 'Bombay to Goa'. The film was a great success. It is with these pictures that his acting life begins.

In 1973, he started seeing success in his acting career with the film 'Zanjeer'. In this film he played the role of an angry man. This film was originally a crime based film. It was through this film that he became known to his fans as 'Angry Young Man'. The film was a huge success, and she was nominated for a Filmfare Award for Best Actor Award that year. Since this film, success has been captured by him one after another.

After that, films like 'Dibaar', 'Sholay', 'Shola', 'Kala Pathhar', 'Trishul', 'Abhiman', 'Namak Haram' and 'Mazabur', which were played by him, achieved special success. In 1975, the film directed by Yash Chopra made a huge success at the box office and he acted in the lead role as well as Nirupa Roy, Neetu Singh, Parvin Boby, Shashi Kapoor in the film. In the same year 'Sholay' was released. This is the picture we have all seen. This movie was one of the hottest hits of all time, and it is still the most traded Hindi film.

For the first time in 1977 he won the Best Actor Award for the film 'Amar Akbar Anthony'. With him in the film, Vinod Khanna and Rishi Kapoor were the main characters. He did double roles in the films 'Adalat', 'Satte Pay Satta', 'Desh Premi' and 'Kasme Vade'. Then in 1978 he had another superheat movie called 'Dawn'. Actress Jinat Aman starred opposite him in the film. He won the second best actor award for this film.

Then in 1979 his starrer film 'Suhag' was the best-selling film of the year. In the same year, his hit films like 'Mr. Natwarlal', 'Manzil' were also released. The following year, the film 'Dostana' was a superhit movie starring him and Shatrugal Sinha. The picture was the highest grossing photo that year. His romantic film 'Silsila' was released in the same year and Jaya Bhaduri and Rekha starred opposite him here. From 1980 to 1986, 'Shan', 'Nasib', 'Satte Pay Satta', 'Andha Kanun', 'Akhri Rasta', 'Mard', 'Pukar', 'Barsat Ki Ek Rat', 'Lawarish', 'Shakti'. 'Pictures were successful. It is to be noted that he was particularly injured when shooting a scene of a shooting while playing 'Coolie' and received such an injury that he was hospitalized for several months due to this. Despite all this, this film was one of the most acclaimed photos of the year.

After three years of this illness he returned to the film world with the film 'Shahenshah'. In the same year, films like 'Jadugar', 'Tufan', 'Mai Azad Hu', 'Tufan', 'Aaj ka Arjun', 'Hum' were also released. In 1990, he won the International Best Actor Award for his performance in 'Agneepath'. After this film he temporarily retired from his acting life for five years. By 1997 he was back in the acting world again. But the movies of this time did not succeed. However, he was successful in 'Bade Mian Chhote Mian', 'Suryavanasam', 'Lal Badshah', 'Hindustan Ki  Kasam'.

But in 2000, the film 'Mahabbatein' starring him and Shah Rukh Khan had great success. He won the Best Supporting Actor Award for this film. After this film, he has again starred in hit films. For example, 'Kabhi Khusi Kabhi Gam' and 'Baghban', both of these films were made with family-centered stories, which made both films successful. In 2005, he received the International Best Actor Award for his performance in the 'Black' film directed by Sanjay Leela Bhansali. He played with his son Abhishek Bachchan in his next film 'Bunty Aur Babli'.

But this is not the end, he has to face failure again through pictures like 'Sugar Kam', 'Ag', 'Ekalavya', 'Nishabd'. Then again he achieved success through his 2008 film 'Bhoothnath'. This film was a child-centric film and was a great success. He also acted in the sequel, 'Bhoothnath Returns' in 2014. In 2009, 'Paa' also made good money. In 2013, for the first timr he got the chance to acting in a Hollywood movie named ‘The Great Gatsby’.

'Piku' in 2015 and 'Pink' of 2016 are among his big hit pictures. It has been heard that he will be seen in the upcoming film 'Brahmastra' starring Ranbir Kapoor and Alia Bhat. Ayan Mukherjee is directing the film.

He married actress Jaya Bhaduri in 1973. They have a son and daughter. Their daughter is named Sweta Bachchan and son Abhishek Bachchan. Daughter Sweta married to Nikhil Nanda. They have a daughter and a son, their names are Navya Nanda and Agastya Nanda. Abhishek married to actress Aishwarya Rai. They have one daughter, named Aradhya Bachchan.