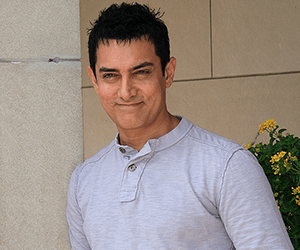 Amir Hussain Khan is an Indian Bollywood actor. He has been associated with the Bollywood world for over 30 years. Through his extraordinary acting prowess, he has established himself as a popular actor and has been honored with various awards.

The real name of Amir Khan is Amir Hussain Khan. He was born on March 14, 1965, in a Muslim film family in Maharashtra, Mumbai. His father's name was Tahir Hussain, who was a film producer in the profession and his mother Zainat Hussain was a housewife. Amir Khan's uncle Nasir Hussain was a producer and director. Amir Khan has three other siblings, namely Faisal Khan, Farhat Khan and Nikhat Khan. Amir Khan is the biggest of them. Amir Khan's nephew Imran Khan is also a Bollywood actor.

He was initially taught at JB Petit School. He was admitted to St Anne’s High School in Bandra for his higher education and secondary school from Bombay Scottish School. After completing his high school education, he joined Narsi Manji College. Along with his studies, he used to play tennis and was also a state level tennis champion.

He married actress Rina Dutt on April 18, 1986 while doing 'Kayamat Se Kayamat Tak'. They have a son Junaid and daughter Ira. But in 2002, their divorce was over. Then in 2005, Amir Khan married Assistant Director Kiran Rao. In December 2001, they gave birth to a son on December 5th, through Surrogacy.

From the age of 16, he became involved with the acting world. In 1984, he assisted with his uncle Nasir Hussain as Assistant Director and directed the films 'Manzil Manzil', and 'Jabardast'. This year, he got the opportunity to perform in films from director Ketan Mehta. But this film did not go that way. He then joined Juhi Chawla in the movie 'Kayamat Se Kayamat Tak' until 1988. The film brought great success to his life. The film received a total of seven Filmfare awards that year. Amir Khan won the Best Male Debut Actor title. The following year he performed in 'Rakh', directed by Aditya Bhattacharya. This film was a special success. He then teamed up again with Juhi Chawla in their next film, 'Love Love Love', which was commercially unsuccessful.

In 1990, he released five consecutive films, including 'Awal Number', 'Tum Mere Ho', 'Jawani Zindabad', 'Diwana Mujhse Nehi', which did not achieve much success but 'Dil Hai Ke Manta Nehi' got a special resemblance. Actor Pooja Bhatt starred opposite him in this film. Released in 1992, 'Jo Jita Bahi Sikandar', 1993 'Hum Hai Rahi Pyaar Ke' released in 1995, 'Rangila' was a special success.

In the same year, he and Salman Khan jointly performed in the comedy film 'Andaz Apna Apna'. It was a total success. The same year his 'tradition' was released which was unsuccessful. In 1996 he starred opposite Karishma Kapoor in the movie 'Raja Hindusthani' directed by Dharmesh Darshan. The film was also one of the best-earning films of the nineties. For the first time, he won the Best Actor Award for his performance in this film. In 1997, he had co-starred with Kajal, Ajay Devgan and Juhi Chawla in the film 'Esq', which was fairly successful. In 2001, he starred in the film 'Lagan' which was a success and he was awarded the Best Actor Award for the second time in his life. In the same year, another hit movie 'Dil Chahta Hay' was released, which was directed by Farhan Akhtar.

‘Rang De Basanti’ was released in 2006, and won the Best Actor Critic title for his performance in the film. In the same year, he and Kajal starrer 'Fanah' was released which was one of the best-earning pictures of that year. In 2008, his performance 'Gajini' was declared the best film of the year. The following year he starred in the movie 'Three Idiots'. The film was a huge success in the Bollywood world, not only in India but also in China and Japan. The film won a total of six awards.

'Dhoom-3' was released in 2013 which was a huge success. Here he also had a double roll. The following year, he and Anushka Sharma released 'PK', directed by Rajkumar Hirani. The film was also a success in Japan. Amir Khan's next hit film was 'Dangal' directed by Nitesh Tiwari, where his brilliant performance helped him win the Best Actor Award for the third time, and was also named as the best film of the year.

Amir Khan has served as marketing ambassador for various brands, such as Titan Watch, Snapdeal, Coca-Cola, Tata Sky, Samsung, Godrej and so on. He is currently working with the Vivo Phone brand.