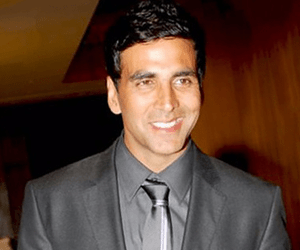 Akshay Kumar is a reputed bollywood actor.He has been in the bollywood film industry for almost 31 years and has acted in over 100 films so far. He has received numerous national and international awards for his acting skills.

Akshay Kumar's real name is Rajiv Hari Om Bhatia. He was born on 9th September 1967 in an ordinary Punjabi family in Amritsar, Punjab. His father's name was Hari Om Bhatia who was an Army officer by profession and his mother Aruna Bhatia was a house wife. He also had a younger sister named Alka Bhatia.

He initially studied at Don Bosco School, then he graduated from Guru Nanak Khalsa College in Mumbai. In addition to studying, he also taught karate. Then he went to Thailand to learn boxing while studying in college. after that he went to Bangkok for learning martial art. Then he worked with a tarvel agency in Kolkata. From there he started teaching martial arts to his students. It was during this time that the father of one of his students gave him modeling opportunities and with the help of a photographer he took his first portfolio without payment. At first he used to shoot for various advertisements. Thus one day he was selected by producer Pramod Chakraborty for his film 'Deedar'.

Akshay Kumar starred in his first film in 1991. Actress Rakhii and Shantipriya opposite him in this movie. The name of this movie was 'Saugandh'. The same year he starred in the movie 'Dancer' directed by Kishore Vyas. Then he appeared in the film 'Khiladi' directed by Abbas Mustan. After that he acted in the movie 'Mr. Bond' directed by Raj Shippy. His next movie 'Deedar' was released in late 1992. But the following year the release of these three films of 'Kayda Kanun', 'Waqt Hamara Hay' and 'Dil Ki Baji', but did not acieve anything. The next year, in 1994, he starred in 'Mohra', which was a huge success and was the highest grossing film of the year. The same year 'Yeh Dil Laga' was released. Here actress Kajol acted opposite him. This film also achieved a special success. This year, his next movies 'Suhaag' and 'Elaan' was released which was made a huge success at box office. Later this year he acted in 'Sabse Bara Khiladi', in this movie he played double role. Then he acted in 'Khiladio Ka Khiladi', starring opposite in Rekha and Rabina Tandon. These films of the Khiladi series gained special popularity.

Then in 1997 he starred in the film 'Dil Toh Pagal Hay'. Actors and actresses such as Shah Rukh Khan, Madhuri Dixit and Karisma Kapoor played with him here. He was nominated for the title of Best Supporting Role Actor for his performance in this movie. In the same year, he and actress Juhi Chawla released the film 'Mr and Mrs Khiladi'. In 1999 he acted in the film 'International Khiladi'. Twinkle Khanna played opposite him here. Both of these films were fairly  successful. The same year two more films were released, 'Sangharsh' and 'Janwar'. But no one was successful at the box office. The next year, he performed in the comedy film 'Hera Pheri', with Paresh Rawal and Sunil Shetty playing with him. This movie was a great success.

Then he and Silpa Shetty starred in the film 'Dhadkan'. He first got the chance to star in the negative character 'Ajnabi'. He won the first best villain title for his performance in this film. A number of his films were released in 2002, 'Haan Maine Vi Pyaar Kiya', 'Aakhein', 'Awara Pagal Diwana' and 'Jaani Dusman'. Of these, 'Jaani Dusman' and 'Aakhein' were fairly successful, but the rest did not. The following year it was first released on 'Talaash:The Hunt Begin' and 'Andaaj'. ‘Andaaj’ made a special success and became commercially successful. Then he was seen in the movie 'Khakee'. He was seen in 'Mujhse Shaadi Korgi' starring Salman Khan and Priyanka Chopra. In the same year, 'Aitraaj', 'Meri Biwi Ka Jabab Nehi', 'Bewafa', 'Waqt:The Race Against Time' and 'Garam Masala' were released by Abbas Mustan. Of these, 'Aitraaj', 'Bewafa' were particularly successful. He won the Best Comedian Actor title for his performance in these films.

In 2006 he released several films in which 'Humkoo Diwana Kar Gaye' and 'Fir Hera Pheri' were successful. In 2007 he starred in 'Namastee London', 'Hey Baby', 'Bhulbhulaiya' and 'Welcome'. The film was a huge success. He also starred in an animation based film 'Jumbo'. In 2009, he teamed up with Deepika Padukone in his next film 'Chandni Chowk to China'. The same year 'Kambaqt Isk' was released but not a single film was a success. Later this year, 'De Dana Dan' was released which received Egyptian reviews.

After that, in 2010, he starred in the movie 'Housefull' directed by Sajid Khan, which was a huge success and became one of the highest grossing films of that year. In the same year, his success was achieved by his performances like 'Tees Maar Khaan', 'Khatta Mitha', 'Action Replay', 'Deshi Boys'. The sequel, Housefull 2, was released in 2012. Which is a huge success at the box office. The same year 'Rowdy Rathore' and 'Khiladi 786' were released, in which 'Rowdy Rathore' blockbuster hit and 'Khiladi 786' was a huge success. His most acclaimed picture was Holiday in 2014. In 2016 his 'Rustom', 'Airlift', 'Houseful Three' were released. Pratibha Pictures is a special success and he won the title of Best Actor. The next year his best picture was 'Toilet:Ek Prem Katha' and in 2018, 'Pad Man' was made a success. 'Kesari' was released in early 2019 where Parineeti Chopra starred opposite him and 'Mission Mangal'. Both these films were a success. His next film, 'Houseful Four', will be released later this year. Apart from this, he has also played actors like Pooja Hedge, Kriti Sanon, Bobby Deol.

He married in 2001, after having a long relationship with actress Dimple Kapadia and actor Rajesh Khanna’s daughter actress Twinkle Khanna. They have a son and a daughter. Their son’s name is Arav and daughter Nitara.